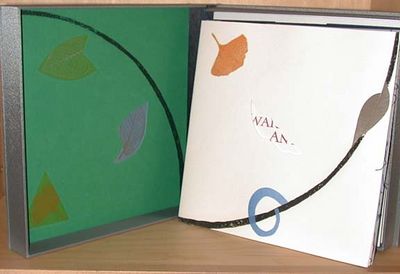 by FitzGerald & Co., Vincent. Breuer, Lee
New York: Vincent FitzGerald & Company, 1992. Artist's book, one of 40 copies only, all on handmade paper by Paul Wong of Dieu Donne Papermill, each copy signed by the artist, Susan Weil, and author, Lee Breuer. Page size: 10 x 10 inches. Bound: handmade paper wrappers in custom box by BookLab, fine. The etchings were editioned by Marjorie Van Dyke and Vincent FitzGerald at The Printmaking Workshop and the text printed letterpress in Bembo by Dan Keleher at Wild Carrot Letterpress. The calligraphy is by Jerry Kelly. Lee Breuer, one of the pre-eminent figures in contemporary theater, was a former chair of the Directing Department at Yale University's School of Drama. He was commissioned by the Next Wave Festival of the Brooklyn Academy of Music (BAM) to write the libretto for an opera by composer Bob Telson, to be staged as part of the innovative productions of this theatre arts festival in 1983. The opera THE WARRIOR ANT has been recorded by Gramavision titled AN ANT ALONE. This is dramatist Lee Breuer's second collaboration with composer, Bob Telson; the first was a staging of Robert Fitzgerald's version of Sophocles' second Theban play, THE GOSPEL AT COLONUS which was also staged at the Brooklyn Academy of Music's Next Wave Festival. Breuer is the founder of Mabou Mines, an experimental theater group, which has mounted Breuer productions of DOLL'S HOUSE, RED BEADS, and PETER AND WENDY, among others. Breuer has been awarded OBIE's for "Best Play, "Best Production," "Directing," "Lifelong Achievement" as well as grants from CAPS, the National Endowment for the Arts, the Rockefeller Foundation, Guggenheim Foundation, as well as Fulbright and MacArthur Fellowships. Susan Weil, an American artist who studied with Josef Albers at the famous Black Mountain College and later in NY at the Art Student's League, was active in experimental artistic developments and was closely associated with such artists as Rauschenberg, Johns, Merce Cunningham, and John Cage. Together with her first husband, Robert Rauschenberg, she published "Blueprints," a series of works which contained figurative and abstract elements drawn from realms of dance, performance, and ready-mades, all of which influenced her future artistic evolution. Her juxtaposition of figurative and abstract elements, her creative use of collage, as well as the pictorial qualities of the various materials she uses for their sculptural potential are highlights of her work. All these elements are present in THE WARRIOR ANT, an intriguing continuum of text and images where the viewer wishes to move forward and yet backward sampling fresh pleasures from the pages each time they are viewed. Once again, Vincent FitzGerald has integrated an avant-garde collaboration in the performing arts with the book arts, rewarding the reader / viewer with text, images, and concepts that challenge and intrigue. (Inventory #: 6652)
$3500.00 add to cart or Buy Direct from
Priscilla Juvelis
Share this item