The Psychic History of the Cliff Dwellers 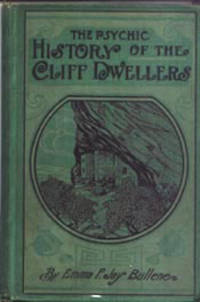 by Bullene, Emma F. Jay
Denver, Colorado: The Reed Publishing Company, 1905. First Edition. 8vo; 256pp; original pictorial green cloth printed in black with a wild landscape pictured; binding a bit rubbed and soiled, spine ends a bit frayed, corners bumped, about very good. With frontispiece portrait of the author; 28 other half-tone illustration. Emma Bullene, a spiritualist who was a trance speaker from Geneva, Wisconsin was part of the lecture circuit in the second half of the nineteenth century. After a lecture in New York City in 1860, a writer in The Banner of Light remarked of her: "That a young Lady not over 18 years of age should speak for an hour and a quarter, in such an eloquent manner, with such logical and philosophical clearness [proved] a power not natural to the education or mentality of the speaker." CLIFF DWELLERS is dedicated to "the Progressive Thought of the Nineteenth Century" without which, Bullene believed, the truth about American prehistory could not have been ascertained. Bullene discovered, through "psycometry" or psychic archeology, that Pueblo Indians were descendants of the Vikings and progenitors of the Mound Builders. According to her, a colony of 10,000 Norse arrived in Michigan via the St. Lawrence River and spread from there. Her method of psychic archeology was a divination of the truth of the past through contact with, or close proximity to, ancient artifacts. CLIFF DWELLERS, a good story, serious, detailed, and believable, is one of the earliest American examples, perhaps the earliest, of psychic archaeology - which is still practiced today. Bullene had access to public and private collections of Pueblo specimens and her "research" was considered by many to be among the new frontiers of scientific method. Braude, Radical Spirits, Spiritualism and Women's Rights in Nineteenth Century America, pp. 85, 98. Williams, Fantastic Archaeology, The Wild Side of North American Prehistory. (Inventory #: 9003)
$400.00 add to cart or Buy Direct from
Priscilla Juvelis
Share this item