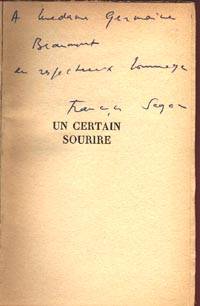 by Sagan, Françoise [pseud of Francoise Quoirez]
Paris: Rene Juilliard, 1956. First Edition, Inscribed by the author on the half-title, "A Madame Germaine / Beaumont / en respcteux homage / Francoise Sagan". 8vo; 189pp; original wrappers printed in black with green lined border, corner of last page missing about 1/8 x 2", a bit browned else fine. Germaine Beaumont, the recipient of this book, was a novelist. Francoise Sagan (1935-), wrote BONJOUR TRISTESSE, her first novel when she was just nineteen. Her second novel, UN CERTAIN SOURIRE appeared in 1956 and further added to fame. Sagan's private life, with her addiction to painkillers and alcohol, her penchant for fast cars and fast driving resulting in a near fatal crash in 1957, has fascinated the French public. Her youth combined with the sophistication of the novels' subject matter and language caused the books to become an international literary event. Her work as an author, playwright and filmmaker have won her a quiet respect among her peers. In particular, her first two novels, with their evocation of an almost existential boredom in a middle-class milieu, using the vocabulary of polite everyday speech to describe nuances of emotion, evoking an apparently simple and transparent world, deserve critical attention. Taking her name from a character in Proust's A la recherche du temps perdu (in what is a not so subtle calling to attention of her style of analysis of emotion contrasting to his) and the title of her first book from a poem by Paul Eluard, Sagan sought to put herself squarely on the French literary map - and beyond. Using literature to achieve the cult status of Elvis Presley and Andy Warhol, her work is, nonetheless, a strong commentary on popular culture. Although Sagan has publicly allied herself with some feminist causes, it is her work that speaks volumes in this area. Her character, Cecile, in BONJOUR TRISTESSE transgresses all of the societal norms for women (at that time) and sets the pattern for many of her subsequent characters. Yet these characters cannot be reduced to the "vamp" stereotype. Masterpieces of Women's Literature, pp. 83-85. Bloomsbury Guide to Women's Literature, p. 983. (Inventory #: 8420)
$750.00 add to cart or Buy Direct from
Priscilla Juvelis
Share this item