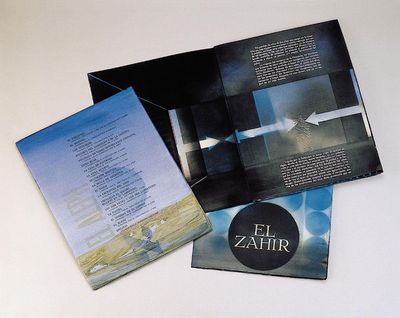 by Ediciones Dos Amigos. Borges, Jorge Luis
Buenos Aires, Argentina: Ediciones Dos Amigos, 1997. One of 25 copies, but each copy unique, all printed on cream Velin d'Arches paper. Etchings and aquatints by Gabriela Aberastury, this copy one of the publisher's copies, unnumbered, but signed in white pencil by the artist, Gabriela Aberastury, the printer, Rubin Lapolla, and one of the publishers, Samuel Cesar Palui. Page size: 13-1/4 inches x 10 inches; 176pp; each page an original print - and many times several different print processes. Bound: loose in original black wrappers with Hebrew letter (Aleph) engraved in silver gilt on front panel and spine, housed in gray cloth over boards clamshell box with original etching on front of box, title printed in black on the spine, box a bit dinged at edges, book fine. Started in 1984 and finished 13 years later under the direction of Samuel Cesar Palui and printed by Ruben R. Lapolla. Samuel Cesar Palui and Ernesto Lowenstein published this book to commemorate the centenary of the birth of Jorge Luis Borges in 1999. The artwork was created by Gabriela Aberastury who editioned all the prints. Rather than illustrate the text story by story, Aberastury chose to explore and reveal the Borgesian universe. She used different techniques: oil, acrylic, lacquer, engraving, gofrado, pencil working with the typographer / printer Ruben Lapolla to create pages that appear to have no beginning and no end - that seem not to have been created but rather revealed. One does not read it as completely enter another realm and experience it with several senses. The text is printed using linotype with gold, silver, copper and black used to create contrasts when the coloring of the paper required it. Truly a masterpiece of book arts, it resembles no other book we've seen. (Inventory #: 9722)
$35000.00 add to cart or Buy Direct from
Priscilla Juvelis
Share this item