Monday or Tuesday. With Woodcuts by Vanessa Bell 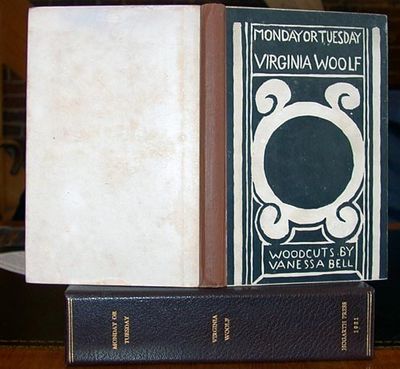 by Woolf, Virginia
London: The Hogarth Press, 1921. First Edition, one of 1,000 copies. 8vo; 91pp; + one page of ads for other books by The Hogarth Press. Black and white illustration on front panel, white panel on back, brick-colored cloth spine. Some minor rubbing to black and white illustration on front panel, endpapers browned, some offsetting from woodcuts to text page opposite as usual (and even so noted in Kunitz & Haycraft, p. 1549), else fine, housed in brick-colored cloth with brown morocco spine clamshell box. Illustrated with four original woodcuts by Vanessa Bell. Hand set and letterpress printed by McDermott at The Prompt Press, Richmond. A lovely fresh copy. Virginia Woolf (1882-1941), English novelist, essayist and critic, married the political theorist Leonard Woolf in 1912, with whom she established the Hogarth Press. MONDAY OR TUESDAY was the first Hogarth Press title to be included in the Annals of English Literature, 1475-1950. It was Woolf's "break out" book and it was noted that with this collection of short stories, Mrs. Woolf "emerged definitely with the liveliest imagination and most delicate style of her time." Vanessa Bell (1879-1961), elder sister of Virginia Woolf, was herself a talented artist. She designed a number of dust jackets for books published by her sister's press, as well as illustrating the books. In her art, she attempted to break the bonds of restrictive Victorian norms. She, and the other members of the Bloomsbury group, made significant efforts to introduce the French avant-garde to an English audience. Bell's art, often decorative, and especially in the period represented in this book owes much to Bonnard, Vuillard and Matisse. (Inventory #: 7367)
$3500.00 add to cart or Buy Direct from
Priscilla Juvelis
Share this item