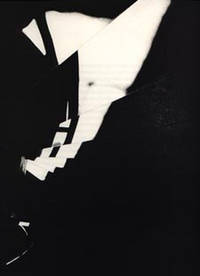 by FitzGerald & Co., Vincent. Kafka, Franz
New York: Vincent FitzGerald and Company, 1990. First Edition thus, one of 50 copies, all on BFK Rives paper, all signed by Turner and Feingold. Page size: 11 x 13". Bound: collaged Japanese grey paper over boards, housed in black silk box, fine. Illustrating Kafka's 15 short fictions are 25 photogravures, a delicate process little used since the 19th century. The process, in which original prints are made from a photograph etched by ultraviolet light on an engraved copper plate, is used in an innovative contemporary way to reflect the great Modernist author's distinctive 20th century sensibility, with its inexplicable fears and haunting sense of helpless isolation. Rather than standing aloof from the text, Turner's images enfold it, combat it, or weave their way across it. Gatefold pages, aquatints adding almost subliminal touches of colors, and collages employing a variety of fine papers in various textures and colors, are among the techniques which add to the effect of a visual environment specially created for Kafka's lost souls to inhabit. (Inventory #: 2995)
$5800.00 add to cart or Buy Direct from
Priscilla Juvelis
Share this item