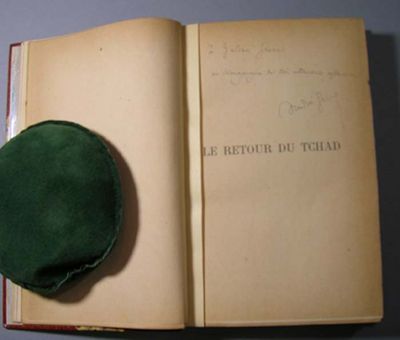 by Gide, Andre
Paris: NRF, Librairie Gallimard, 1928. First edition, inscribed by Gide on the half-title to fellow author, Julien Green: "a Julien Green en temoignage de tres attentive affection, Andre Gide." This is a splendid association copy. Green, a novelist of American parentage who was born in Paris, was a member of the French Academy -- as was Gide. Green converted to Roman Catholicism in 1916 and was often described as a "Catholic novelist" -- a term he rejected. Still, his novels depict the anguish and despair that result from the conflict between man's spiritual and carnal desires. Gide's novels were banned by the Catholic Church. This title, LE RETOUR DU TCHAD, along with VOYAGE AU CONGO was severely critical of French colonization in Africa. 8vo; hansomely bound by H. Alix in 3/4 crushed chestnut brown morocco and marbled paper boards, spine with gilt lettering, marbled endpapers, t.e.g., original wrappers and backstrip bound in, text browned, else fine. (Inventory #: 1561)
$1000.00 add to cart or Buy Direct from
Priscilla Juvelis
Share this item