A Shelf of Old Books 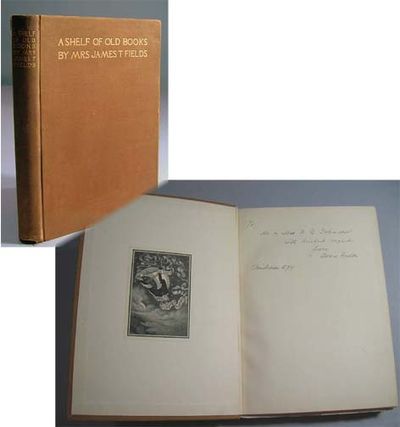 by Fields, Annie [Adams]
New York: Charles Scribner's Sons, 1904. First Edition, first printing, inscribed by the author on the ffe, "To Mr. & Mrs. R. U. Johnson / with kindest regards / from Annie Fields. / Christmas 1894." 8vo; 216pp; brown gilt-stamped cloth, boards a bit bowed, tips and spine ends a bit rubbed, ex-libris of Robert Underwood Johnson on front pastedown, but generally very good+. Annie Fields (1834-1915), is cited in most references as an author, biographer, diarist, and literary hostess, wife of publisher James T. Fields and, later, companion to Sarah Orne Jewett. However, with the publication of HOW TO HELP THE POOR and her corresponding act of founding the Associated Charities of Boston and serving as its first director (1879-1894) and vice-president (1894-1906), she defined for herself an important place in the American history as a founder and key leader in the American social welfare movement. Robert Underwood Johnson (1853-1937), poet and editor, born in Washington, D.C. was raised and educated in Indiana. Through his post as associate editor and then editor of the "Century Magazine" was able to bring about reform in American copyright law as well as help create Yosemite National Park and the American Academy of Arts and Letters, serving as secretary of that organization from its creation to the end of his life. He and his wife, Katharine McMahon Johnson, life in New York City and undoubtedly met Annie Fields much earlier than the 1904 date of this book. Annie's husband, the most famous publisher / editor of his day, and his no less famous wife whose literary salon was renowned among literary circles would have been known to Johnson since his first days at the Century (1873). By 1881 when Johnson was named associate editor, Fields had just passed away, but Annie continued her association with authors (particularly Jewett) and began writing herself. This is a lovely association copy - linking the first great American editor / publisher with the next generation. NAW I, pp. 615-617. DAB, Supplement II, pp. 348-349. (Inventory #: 8044)
$1200.00 add to cart or Buy Direct from
Priscilla Juvelis
Share this item