The Lost Ones. Seven Etchings by Charles Klabunde 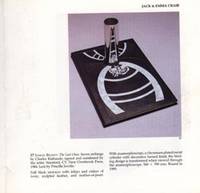 by New Overbook Press. Beckett, Samuel
Stamford: The New Overbrook Press, 1984. This copy in a unique binding by Jack & Emma Craib: full black morocco with mother-of-pearl onlays forming design of characters from the play climbing out of the cylinder tube in which Beckett has set the play. The design reveals itself as a pictorial image only with the use of an anamorphoscope which is a 6 inch silver tube sitting on top of one of the marble onlays. Limited to 250 copies on Rives, each copy signed by Samuel Beckett. Each of the seven etchings is hand-numbered and signed by the artist, Charles Klabunde. Charles Klabunde, master engraver, was born in Nebraska where he spent the first two formative decades of his life. He received his MFA at the University of Iowa where his unusual talents were discovered by master print-maker Mauricio Lazansky who invited Klabunde to join his Print Workshop. Following his one-man exhibition at The Minneapolis Institute of Art, the artist moved to New York where he established his own printmaking studio and taught at Cooper Union. His work was prominently featured in the 1969 Associated American Artists' "New Talent in Printmaking" Exhibition and in 1970 in "five New York Printmakers" at the Whitney Museum of American Art. In 1971, he received the prestigious Guggenheim Fellowship. His works are represented in The Metropolitan Museum of Art, The Museum of Modern Art, The Victoria and Albert Museum, The National Gallery, The Art Institute of Chicago, the Bibliotheque Nationale etc. Klabunde's imagery and iconography, although highly individualistic, is often traced from the work of Bosch, Durer, Breughel, Callot, Rembrandt, Blake, Goya, Meryon, Redon, Klinger, Ensor, Magritte, Klee and Picasso. Samuel Beckett received the Nobel Prize in 1969 and great attention was focused on his next work, THE LOST ONES, which was his most sustained narrative to have appeared for many years. "Inside a flattened cylinder fifty metres round and sixteen high" live Beckett's lost people. Their relentless search for an escape from the cylinder gives THE LOST ONES a tragic force as a mirror of our own existence. Beckett requested that The New Overbrook Press edition include certain alterations to THE LOST ONES which make it the definitive version of his work. The author translated the text from the original French version, LE DEPEUPLEUR. The publisher, Charles Altschul, designed this limited edition as the inaugural offering of The New Overbrook Press. A graduate of Yale University, he has received numerous awards for his fine printing and bookmaking. (Inventory #: 1039)
$8000.00 add to cart or Buy Direct from
Priscilla Juvelis
Share this item