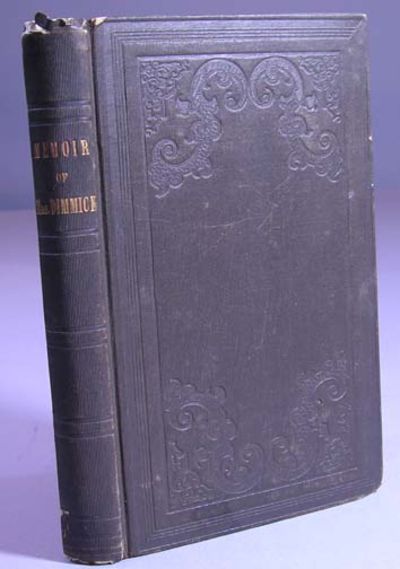 by Dimmick, L[uther] F[raseur]
Boston: T. R. Marvin, 1846. First Edition. Original black blind stamped cloth boards with binder's title in gilt. Tips and edges of spine chipped, corners bumped and rubbed else very good. Luther Dimmick (1790-1860), clergyman and writer, was born in Shaftsbury, Vermont, graduated from Harvard Divinity School, and served as the pastor of North Church in Newburyport, Massachusetts. As a writer, he focused on religious topics, publishing many of his sermons given at North Church. His published sermons covered a range of topics and themes, from funeral eulogies and reflections on Christian scholarship and daily life to essays on the moral aspects of temperance. Although it too has a religious theme, his MEMOIR OF MRS. CATHARINE M. DIMMICK is a departure from his other work. It was never a sermon, written instead as a spiritual biography of and a memorial to his late wife Catharine Mather Marvin Dimmick (1793-1844). Mrs. Dimmick was born in Norwich, Connecticut into a prominent family with colonial roots. Her father died when she was a child and her mother died when she was a teenager, and shortly after her mother's death she became a school teacher. She would later move to Newburyport, and while attending North Church, she met Reverend Dimmick. The two married May 4, 1820 and from then until December 8, 1844, when Catharine died from liver disease, the couple lived a life centered around their shared faith and commitment to ministry. While narrated objectively and with a degree of distance, MEMOIR OF MRS. CATHARINE M. DIMMICK is a tenderly written and intimate account of the spiritual life and daily thoughts and concerns of Mrs. Dimmick. Reverend Dimmick uses excerpts from his wife's journals and letters and reflections and comments from his wife's friends and acquaintances as well as his own remembrances to create this memoir. He presents the life of his wife as a model clergyman's wife and as the embodiment of Christian principles. A writer in a review of the book in the October 1846 issue of NEW ENGLANDER AND YALE REVIEW says of Mrs. Dimmick: "She seems to have been a lady of a superior and very active mind, and of more than ordinary devotion to the various and trying duties that fall to the lot of a pastor's wife." Wallace, Dictionary of North American Authors Deceased Before 1950. New Englander and Yale Review, pp. 604-605. (Inventory #: 7779)
$150.00 add to cart or Buy Direct from
Priscilla Juvelis
Share this item