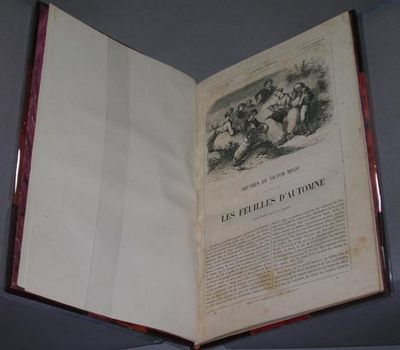 by Hugo, Victor
[Paris]: J. Hetzel, 1853. Folio, bound in 3/4 maroon morocco and pastepaper boards, gilt fillets, spine panelled, title gilt, top edge gilt. Eighty pages of this two-column popular edition of one of Hugo's early series of poems near fine. Hetzel, the publisher, was a constant companion of Hugo during their joint exile in Brussels. While the poet refused amnesty and remained a voice of conscience, Hetzel was repatriated to Paris and resumed his publishing. He was the first to bring out these cheap editions of Hugo's work starting in 1853. Jean-Adolphe Beauce (1818-1875), painter of battle scenes, was one of the early illustrators of these editions, whose drawings were translated onto woodblocks. This edition includes 19 wood-engraved vignettes after Beauce in-texte. It is probably excerpted from a four-volume octavo edition, Oeuvres Illustrees de Victor Hugo, Edition J. Hetzel, 1853-1855. With text in two columsn, it includes illustrations after Gavarni, Celestin Nanteuil, Gerard Seguin, Beauce, et al., This was the first illustrated popular edition of Hugo's work and was reprinted many times by not only Hetzel but other publishers. Bound with Hugo's Les Chants du Crepuscule. (Inventory #: 565)
$350.00 add to cart or Buy Direct from
Priscilla Juvelis
Share this item