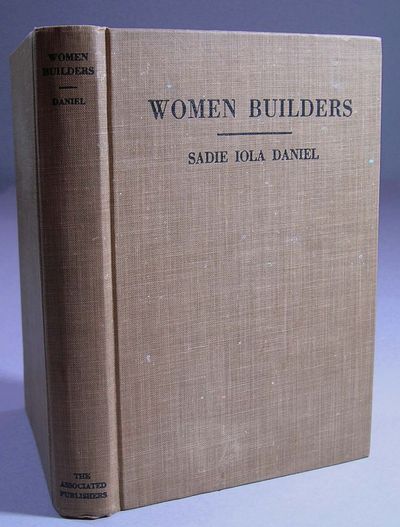 by Daniel, Sadie Iola
Washington, DC: The Associated Publishers, 1931. First Edition. 12mo; 187pp; brown cloth with title in gilt. Some minor cover spotting, else very good. 28pp. of plates, photo illustrations of African American women leaders. WOMEN BUILDERS features the biographies of seven African-American women who founded institutions for the African American community. Included in this volume are Lucy Craft Laney, Maggie Lena Walker, Janie Porter Barrett, Nannie Helen Burroughs, Charlotte Hawkins Brown, Jane Edna Hunter, and Mary McLeod Bethune. Heirs to the work of the humanitarian movements of the early to mid-1800s and the gains of the post-Civil War era push for Black education and enlightenment, these women became both "builders of educational, financial and social institutions" and builders of their race. Sharing a common interest in improving social conditions for Black Americans and creating financial and educational opportunities where they had previously not existed, these women influenced each other as well as society at large. The focus of this book is on the lives of individuals, not on the "bricks and mortar" of buildings and institutions. The author believes in the Emerson quote that "an institution is but the lengthened shadow of a great personality." Instead of merely examining the institutions themselves, Daniel looks at the women behind the schools, banks, and institutes she chronicles. The result is an inspirational volume on the accomplishments of pioneering Black women. "These founders," Daniel writes, "are not mere visionaries with ephemeral dreams, but women of action whose character has been tempered in the forge-fire of anxiety and sacrifice." These women and their institutions are Lucy Craft Laney, 1854-1933 (Haines Normal and Industrial Institute, Augusta, Ga.); Maggie Lena Walker, 1867-1934 (the St. Luke Penny Savings Bank, Richmond, Va.); Janie Porter Barrett, 1865-1948 (Virginia Industrial School for Colored Girls, Peake, Va.); Mary Mcleod Bethune, 1875-1955 (Bethune-Cookman College, Daytona Beach, Fl.); Nannie Helen Burroughs, 1879-1961 (National Training School for Women and Girls, Wash., D.C.); Charlotte Hawkins Brown, 1882-1963 (Alice Freeman Palmer Memorial Institute, Sedalia, N. C.); Jane Edna Hunter, 1882-1971 (Philiss Wheatly Association, Cleveland, O.). Heirs to the work of the humanitarian movements of the early to mid-1800's and the gains of the post-Civil War era push for Black education and enlightenment, these women shared a common interest in improving social conditions for their race by creating financial and educational opportunities which hitherto had not existed; they were influential both upon themselves and upon society at large. The emphasis of WOMAN BUILDERS is on the lives of these individuals. Walker was the first woman bank president in the United States, and founded the Richmond Council of Colored Women. Barrett, the first president of the Virginia State Federation of Colored Women's Clubs, was active in both the National Association of Colored Women and the NAACP; her aforementioned school was for delinquents and achieved an outstanding rehabilitation record. Laney's had established the first kindergarten for African American children in Augusta (and one of the earliest in the south) and the first Nurses Training Institute for African American girls; her secondary school sent graduates to some of the leading colleges in the south; she was praised by President Taft and inducted into the Georgia Women of Achievement in 1992. Bethune, the first African American woman to become a presidential advisor when F. D. R. appointed her director of Negro Affairs, also served three other presidents and was president of the National Association of Colored Women and founder of the National Council of Negro Women. Miss Burroughs' school was founded under the auspices of the National Baptist Convention and was a pioneer fort in several ways. Brown was vice-president of the National Association of Colored Women, a member of several interracial commissions, received many awards as a teacher, and was a member of the Twentieth Century Club of Boston. Jane Hunter's institution was a working girls home and assisted African American women to find employment; it became a model for similar urban institutions. All these women dedicated their lives to the advancement of their race. An important reference work in the history of African-American women, WOMEN BUILDERS was recently reprinted in 1997 as part of a collection of biographies of African-American women, along with Hallie Quinn Brown's TALES MY FATHER TOLD and PEN PICTURES OF PIONEERS OF WILBERFORCE. NAW: the modern period. Black Women in America. DAB Supplement V. (Inventory #: 8032)
$500.00 add to cart or Buy Direct from
Priscilla Juvelis
Share this item