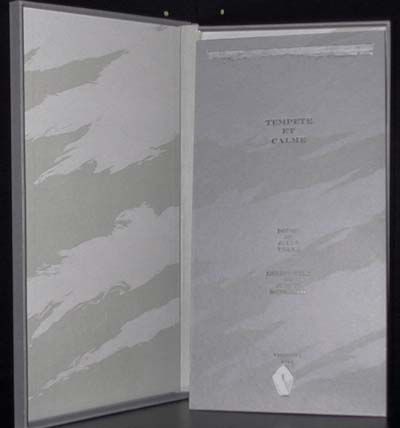 by Verdigris Press. Verne, Jules
Octon, France: Verdigris Press, 2004. One of 38 copies only, all on Hahnemuhle paper, each copy hand-numbered and signed by the artist Judith Rothchild and the printer, Mark Lintott. Page size: 11-3/4 inches x 5-15/16 inches; 4 leaves + colophon printed on gray paper mounted on inside rear cover. Bound by Mark Lintott: leporello style, but on the vertical, original screen prints by Judith Rothchild in subtle shades of gray on the front and back boards, with gray silk ribbon pull at bottom of front board, housed in publisher's clamshell box of gray paper, title printed in black on front panel, lined with screen prints made by Rothchild in shades of gray, fine. Jules Verne's poem was written in 1848 when the author was just 20. The poem literally passes through a storm before reaching safe haven on the other side. The text is superimposed on a series of four of Rothchild's ominous mezzotints which start with a threatening sky, go to the complete blackness of the storm and then to clouds quickly moving to sunlight. The text is hand set and letterpress printed in Vendome romain on an Albion press by Mark Lintott. Considering world events of 1848, Verne shows himself to be an optimist with this moving verse admirably served by Rothchild's handsome images which really give a sense of the speed and drama of the storm. Meticulously crafted, this is a lovely book. Selected for inclusion in Wellesley College exhibition and catalogue, RESONANCE AND RESPONSE (2005). (Inventory #: 9500)
$750.00 add to cart or Buy Direct from
Priscilla Juvelis
Share this item