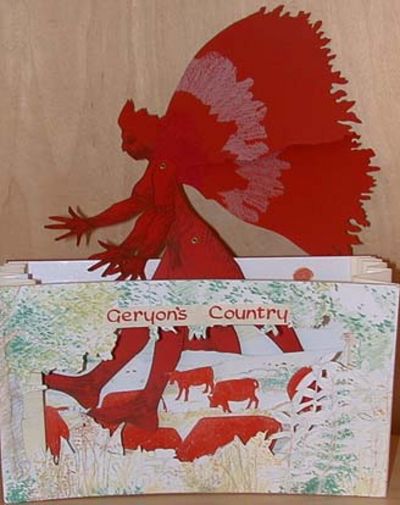 by Morrison, Lois
[Leonia, NJ], 2005. One of 25 artist's books in form of tunnel , each containing a three-dimensional accordion-file bucolic scene of Geryon's red cattle, as well as three stand-alone cut-out figures, one of Geryon himself, with legs, arms, and wings grommeted so all 6 legs and arms and 2 wings move, and he can be inserted in the panorama with his herd and his red dog, jaws grommeted so that he can bear his teeth or not, and one figure of Geryon WITHOUT wings but with his six arms and legs gromted so that he can be inserted in the panorama with his herd. The artist's statement is Gocco-printed and color penciled onto digital color supreme glossy recycled Arches text wove paper and appears on each side of the "tunnel.". The figure is handcut and assembled from Fabriano Tiziano lava red paper. The text on the left side of the panorama recounts one of Hercules' twelve labors - the stealing of Geryon's cows - during which Hercules kills the six-armed, six-legged giant. The text on the right side of the panorama refers to an alternate version of the mythy, citing Anne Carson's AUTOBIOGRAPHY OF RED in which she portrays a far more vulnerable Geryon, who had a red dog that was also killed by Hercules during his theft. The artist captions her panorama without words "Believe what you will." Another two-sided story - provocatively and beautifully told through visualization. Size: 5-3/8 inches x 9 inches opening to 4 inches; colophon on back of panorama within foldout case that also houses cut-out figure, the whole book housed in custom-made printed gold and red cloth case, lined with red silk, fastened with white buttons, fine. (Inventory #: 9649)
$750.00 add to cart or Buy Direct from
Priscilla Juvelis
Share this item