The Cruise of the Vanadis. Introduction by Claudine Lesage 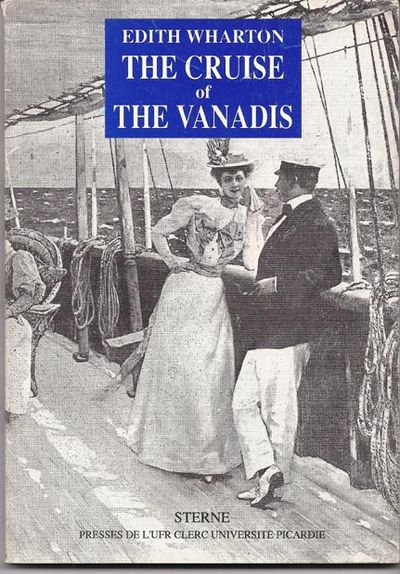 by Wharton, Edith
Amiens: Sterne/Presse de l'UFR Clerc Universite Picardie, 1992. First Edition, one of 400 copies only. 8vo; 142pp; gray decorated wrappers printed in white on blue label. In 1989, Professor Claudine Lesage, while doing research on Joseph Conrad (who had visited Polish friends in Hyeres when he first came to the Mediterranean), was shown an unsigned manuscript in English (although EW's ex-libris was present) by the librarian at the Municipal Library in Hyeres. Lesage investigated further and found in the Lewis biography that Wharton did tour the Aegean in 1888 with Teddy and James Van Alen and "Mind" Fearn, American Minister to Greece. Lesage was able to determine the year of the cruise by a reference to the date of Easter in the manuscript. And, although unsigned, the manuscript is most definitely in the hand of Mrs. Wharton. Unlike the other posthumously published Wharton manuscript, FAST AND LOOSE (1977), there was no reference or indication that this account of the cruise existed. The text, written when she was 26, is, of course, her first travel book, a harbinger of ITALIAN VILLAS, IN MOROCCO, MOTOR-FLIGHT, etc. And, unlike FAST AND LOOSE, it is the work of a young woman -- not a young girl. In fact, Mrs. Wharton, in 1888, really came into her own: towards the beginning of this several-month voyage, she learned she had inherited (from a distant uncle) enough money to make her a person of independent means. According to Lewis, she resumed her writing on returning to New York later in 1888. We know now -- through publication of this manuscript -- that she had not really abandoned her writing. She simply did not share it with anyone. Not in Garrison. (Inventory #: 9174)
$75.00 add to cart or Buy Direct from
Priscilla Juvelis
Share this item