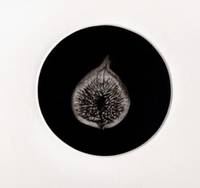 by Verdigris Press. Lawrence, D.H.
[Octon,France]: Verdigris Press, 2001. One of a few deluxe copies with an extra mezzotint not included in the regular edition from a total of 48 copies, on Hahnemuhle paper, each signed and numbered by the artist, Judith Rothchild. Page size:11-1/4 x 10-3/4 inches; 32pp. Bound: loose in Somerset Velvet Black paper wrappers with green silkscreens; title on front panel and on spine with author and artist's name. Hand-set in Vendand ome printed by Mark Lintott on an Albion press and a Stanhope press. Slipcase and box by Claude Vallin; with silkscreens by Judith Rothchild, fine. Judith Rothchild has chosen to illustrate D.H. Lawrence's provocative poem "Figs" with five round mezzotints and silk-screens. The first mezzotint, a fig leaf, is overprinted with the title. The other four show a whole fig and then ripe figs in various stages of bursting with six silk-screens of fig leaves and branches. A two-color silkscreen of a fig leaf (the second color is red!) faces the colophon. First published in BIRDS, BEASTS, AND FLOWERS (1923), Lawrence's poem achieved greater acclaim when it was used in Ken Russell's film "Women in Love" (1970). This sumptuous combination of text and illustration is sure to fulfill! (Inventory #: 9053)
$1300.00 add to cart or Buy Direct from
Priscilla Juvelis
Share this item