Addresses to the Deity. The third edition. 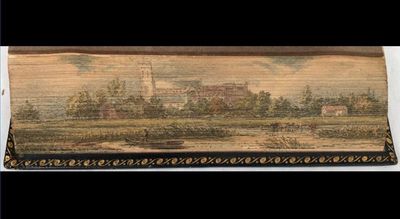 by [Fore-edge Painting] FORDYCE, James (1720-1796).
London:: Printed for T. Cadell, Jun. and W. Davies, by G.R. Clarke, 1801., 1801. Small 8vo. xx, [ii], 232 pp. Original full dark navy blue straight-grained morocco, gilt Greek-key tooling surround, five raised bands, elaborate gilt compartments, all edges gilt. Very good +. With a fine fore-edge painting under the gilt showing "Christchurch in Hampshire (here James Fordyce lived)." With an early typed note relating to the painting. The artist possibly copied the engraving "Christchurch, Hampshire" from the print by E. Finden after a picture by W. Westall, published in Great Britain Illustrated, 1830. This view shows the single row boat in the foreground similar to the image with this fore-edge painting. Artist unknown; painted ca. 1900-1955. This scene is delicately and skillfully painted. "Fordyce's delivery and gestures were studied, and he drew crowds to Monkwell Street. His topics were didactic, but he also satisfied cultured tastes, and dealt with the ethics of actual life. David Garrick was impressed; Fordyce associated with Samuel Johnson, and introduced him to Blair. He gave sympathetic account in Addresses to the Deity, 1785, of Johnson's religious character, speaking as an evangelical moderate." [DNB]. (Inventory #: FF178)
$1,350.00 add to cart Available from
Jeff Weber Rare Books
Share this item