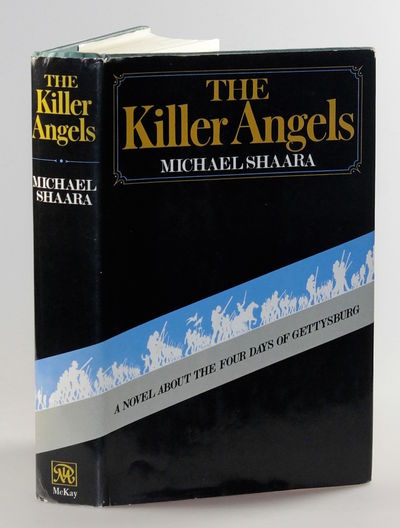 by Michael Shaara
New York: David McKay Company, Inc., 1974. First edition, first printing. Here is a jacketed first edition, first printing, of Michael Shaara's celebrated Civil War novel.  Michael Shaara (1929-1988) began his career as a writer of short stories, primarily science fiction.  As a prolific short story writer he enjoyed a certain amount of success, winning several awards and having two of his stories produced as television dramas in the late 50s. In the early 60s he began to work on more ambitious projects. His first novel, The Broken Place (1968), was about a soldier who returns from the Korean War and becomes a prizefighter. Though critically praised for its style, The Broken Place was a commercial failure, which sadly set the pattern for Shaara's three novels published in his lifetime.  The Killer Angels followed, the manuscript taking Shaara seven years to complete. Rejected by the first fifteen publishers that saw it, when finally published, The Killer Angels saw little attention and received mixed reviews.  Moreover, the book had the misfortune of being a war novel published during the anti-war apex of the Vietnam War.  It is understandable, then, that it was a surprise for both Shaara and the wider literary community when The Killer Angels received the 1975 Pulitzer Prize for fiction.  Despite this win, there was not much commercial interest in this book until 1993, five years after Shaara's death, when the film based on the novel, Gettysburg, was released. This propelled The Killer Angels to the number one spot on the New York Times bestseller list and prompted an interest in Shaara's other works.  Shaara's interest in the Civil War was spurred by personal history; Shaara's great-grandfather was a member of the 4th Georgia Infantry who was injured at Gettysburg.  Seeking to learn more about his great-grandfather's experiences there, Shaara took a family trip to Gettysburg in 1966.  Perhaps Shaara's compellingly graphic and intuitive writing in The Killer Angels was informed by his own early experience as a paratrooper for the 82nd Airborne Division, an amateur boxer, a merchant seaman, and a police officer.  The Killer Angels now ranks among the most popular and acclaimed works of Civil War fiction.  Celebrated documentary film maker Ken Burns called The Killer Angels "a book that literally changed my life" and said "I had never visited Gettysburg, knew almost nothing about that battle before I read the book, but here it all came alive."  Here is the first edition, first printing in dust jacket.  Condition of both the book and dust jacket is near-fine.  All first edition points are confirmed; there are five lines each on both the top and bottom of the copyright page and no mention of subsequent printings, the binding is light blue cloth boards with a darker blue paper-covered spine, the dust jacket features a photo of the author on the rear panel, no reviews, and no bar code.  The binding remains square, clean, and tight with trivial wrinkling to the spine ends.  The contents are clean and bright with no spotting and no previous ownership marks.  The dust jacket is bright and unclipped, retaining the original $8.95 front flap price and showing no losses or tears. We note only light wear to the spine ends and corners.  The dust jacket is protected in a removable, archival quality clear cover.    (Inventory #: 003133)
$2,888.00 add to cart or Buy Direct from
Share this item