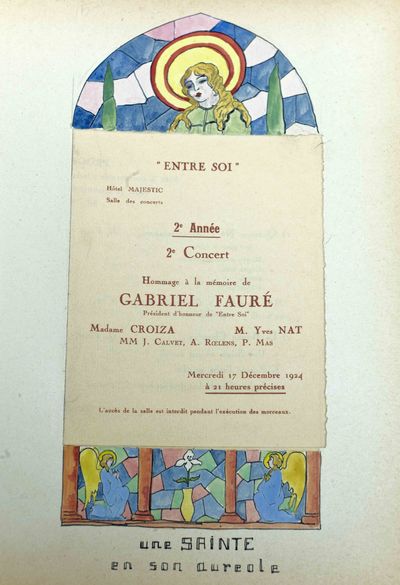 (Paris: 1923-1926 Paris). Large quarto album, some wear and staining to covers. With mounted photos of each member of the original Quatuor Calvet. With 24 programs forming a complete series for the first three years (the series lasted until 1929) . Each program is mounted on a page with delicately watercolor scene in the background, based on the music of the concert. These drawings are by the artist René Duvau (1883-1963).

The chamber music series named "Entre Soi" was devoted to small ensemble sometimes with voice, often featuring the Quatuor Calvet* founded byJoseph Calvet in 1919. The series was known to feature contemporary French chamber music especially that of Fauré, Chausson, Frank and others. The soirees were held at the famous Hotel Majestic.

*The Calvet Quatuor was a string quartet founded in Paris in 1919 by Joseph Calvet (b Toulouse, 8 Oct 1897; d Paris, 4 May 1984). Other members were Georges Mignot, Léon Pascal and Paul Mas.Mignot and Pascal had previously played in Marcel Chailley's quartet. In 1928 the ensemble gave its first Beethoven cycle at the instigation of Nadia Boulanger. It had an illustrious history as interpreters of the works of Fauré, Debussy and Ravel In 1940 it disbanded ...but its members were hugely influential : Joseph Calvet taught generations of French chamber musician; Daniel Gueilevitch who replaced Mignot in 1929 had his own quartet in the USA and founded the Beaux Arts Trio and violinist Léon Pascal had his own quartet from 1940 through the 1950s.

Full description: cut and paste to your browser the link below