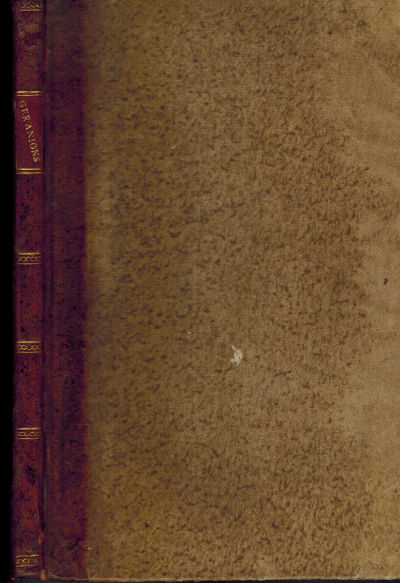 by [DUMONT, GEORGE LOUIS MARIE DE COURSET
Paris, 1815. Half Calf. Very Good. 8vo(20.6 x 12.7 cm). Contemporary half calf over tan speckled marble boards; gilt title and tooling on spine. Collation: [1], 83, [8- Index] pp. Text written on crisp and clean laid paper having identifiable watermark. Text covers description of 130 geranium species from different regions of world in two sections based on regular or irregular corolla. The text proceeds from introduction with general attributes of geraniums to observations of variations of corolla, floral leaves and standard varieties, which are the first 17 plants in the register. The following discussion covers 113 irregular varieties. In describing these varieties the author notes concurrence or variance in description to that of other botanists. The natural location of each species is noted along with flowering season. The most prominent are those found in eastern part of Mediterranean. Both Latin and French names are provided for each plant. This is complemented at end of manuscript with information on cultivation. Not all plants described are listed in the index, indicating that the author set the work aside for completion. There is no geranium number 18 described in the text. This may have been an error on the author's part as no. 17 ends one section followed by an entirely new chapter. The vast majority of species described are native to the environs of Cape Town in South Africa, Table Mountain being specifically identified at least once. A few species are identified for each of the following regions: Egypt, the Barbary Coast, Madeira, North America and Maritime Coast, Italy, the Alps and France.

George Louis Marie Dumont de Courset (September 16, 1746 & 1824) was a French botanist and agronomist. Born near Boulogne, he studied in Paris and showed an aptitude for music and drawing. He joined the military when he was 17 and became a second lieutenant. Sent to the south of France, he visited the Pyrenees and caught a passion for botany. He gave up his military career and returned home to build an extensive garden that became famous for the diversity of plant species. He tried to influence the agricultural techniques employed in his area. Protected by scientists like André Thouin (1746&1824) during the Revolution, he became corresponding member of the French Academy of Agriculture. He published five volumes on the Botaniste cultivateur, ou description, culture et usage de la plus grande partie des plantes étrangères, naturalisées et method es, naturalisées et methodes, cultivées en Franc et en Angleterre, ranges suivant la method de Jussieu in 1802. Later he entirely re-examined the work and re-issued it in six volumes (1811). In these volumes, Dumont de Courset described 8,700 species and indicated their characteristics and their cultivation. (Inventory #: 0000630)
$1,850.00 add to cart or Buy Direct from
Antiquariat Botanicum
Share this item
Antiquariat Botanicum
Offered by

All items are offered subject to prior sale. All items are guaranteed as described and can be returned if unsatisfactory within 10 days of receipt and with prior notice. Returned items must be packaged in the manner received, and with tracking information provided. We accept Visa, MasterCard, checks (in U.S.currency) and wire transfers (please contact for details). Shipments on credit card orders will only be to the address of the credit card holder. Advance payment is required for all first time clients, institutions excepted. Minimum ground shipping in continental U.S is $10.00 for the first book and $4.00 for each additional book with larger orders at cost. All International shipping will be by air express at cost unless client requests differently.
More from this seller

A Complete Dictionary of Practical Gardening: comprehending all the Modern Improvements in the Art; whether in the Raising of the Various Esculent Vegetables, or in the Forcing and Managing of different Sorts of Fruits and Plants, and that of Laying out,

London : printed for George Kearsley by R. Taylor and Co , 1807
(click for more details about A Complete Dictionary of Practical Gardening: comprehending all the Modern Improvements in the Art; whether in the Raising of the Various Esculent Vegetables, or in the Forcing and Managing of different Sorts of Fruits and Plants, and that of Laying out,)