Songs Of Innocence And Of Experience, shewing the Two Contrary States of the Human Soul. 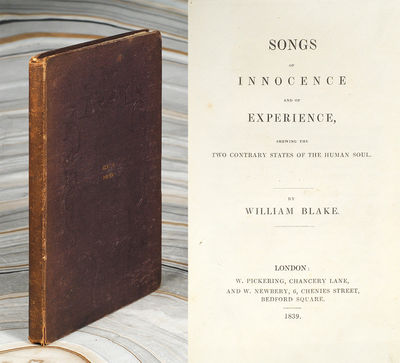 by Blake, William.
London: W. Pickering, Chancery Lane, and W. Newbery, 6, Chenies Street, Bedford Square, 1839. Small 8vo, xxi, (3), 74 pp. Original pebbled plum cloth, upper cover lettered in gilt (partly worn away as often), a very good copy in a variant original binding, slightly worn around the edges, upper hinge a touch weak, internally bright and very attractive. Enclosed in a modern protective box. § First Typographical Issue, the issue with the poem “The Little Vagabond” not present - this has long been held to be the first issue (see Keynes) although others have claimed that it was present but cancelled due to content and thus this is the second issue. Either case is plausible; copies of each issue turn up with about the same frequency which is to say very rarely. The preface (by J.J. Garth Wilkinson) gives a mostly favorable account of Blake’s life in the context of his work and concludes stirringly: “If the volume gives one impulse to the New Spiritualism which is now dawning on the world;-if it leads one reader to think, that all Reality for him, in the long run, lies out of the limits of space and time; and that spirits, and not bodies, and still less garments, are men; if it gives one blow, even the faintest, to those term-shifting juggleries which usurp the name of “Philosophical Systems,” (and all the energies of all the forms of genuine Truth must be henceforth expended on these effects,) it will have done its work in its little day...” Keynes, Blake, 135 (issue without “The Little Vagabond"). Bentley, Blake Books, 171 (this issue said by Bentley to have two leaves cancelled by the editor out of prudishness). (Inventory #: 106538)
$17,500.00 add to cart or Buy Direct from
John Windle, Bookseller
Share this item

Official Letters to the Honorable American Congress, Written during the War between the United Colonies and Great Britain, by His Excellency, George Washington, Commander in Chief of the Continental Forces, now President of the United States.

London : G.G. and J. Robinson , 1795
(click for more details about Official Letters to the Honorable American Congress, Written during the War between the United Colonies and Great Britain, by His Excellency, George Washington, Commander in Chief of the Continental Forces, now President of the United States.)

The Poems of John Keats Arranged in Chronological Order with a Prefae by Sidney Colvin.

London : Chatto & Windus , 1920
(click for more details about The Poems of John Keats Arranged in Chronological Order with a Prefae by Sidney Colvin.)
View all from this seller>