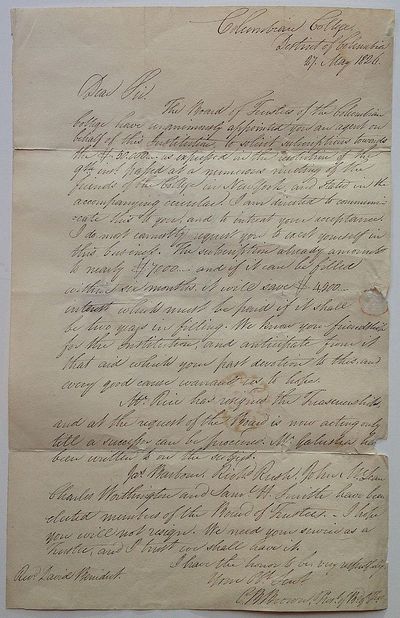 by (BENEDICT, David) (1779 - 1874)
District of Columbia, 1826. unbound. 1 page, 12.75 x 8 inches, District of Columbia, May 27, 1826. Written by C.B. Brown, President of the Board of Trustees at Columbian College, inviting Reverend Benedict to assist in the solicitation of funds for the college, in small part: "...The Board of Trusties of the Columbia College have unanimously appointed you an agent on behalf of this Institution to solicit subscriptions towards the $50,000 as required in the resolution of the 9th passed...at a meeting of the friends of the College in New York...and stated in the accompanying circular (not included). I am directed to communicate with you and to entreat your acceptance..." Benedict did not accept due to his commitment to Brown University of which he was a trustee for over 58 years. This letter has some weakness at the folds with three small tears at the right-hand margin caused by the removal of the wax seal. Very good(-) condition. Rhode Island clergyman and staunch Mason who relinquished his pastorate after 25 years service due to the Anti-Masonic agitation in 1828. He was a prolific writer who spent his life setting up new churches and religious associations for education and philanthropy. (Inventory #: 255778)
$150.00 add to cart or Buy Direct from
Argosy Book Store
Share this item

Section of the Map of the States of Kansas and Texas and Indian Territory, with Parts of the Territories of Colorado and New Mexico

New York : Julius Bien & Co.; US War Department , 1867
(click for more details about Section of the Map of the States of Kansas and Texas and Indian Territory, with Parts of the Territories of Colorado and New Mexico)

New York : Julius Bien & Co.; US War Department , 1895
(click for more details about Approaches to New Orleans; Battle of Atlanta; Maps of Spanish Fort)
View all from this seller>