The plays of William Shakespeare, in eight volumes, with the corrections and illustrations of various commentators; to which are added notes by Sam. Johnson 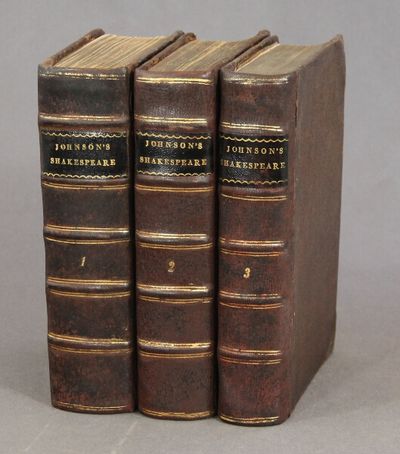 by Shakespeare, William
London: J. & R. Tonson, 1765. First variorum edition of Shakespeare "and the foundation of hundreds of subsequent issues" (Jaggard); first Johnson edition, without the names of Longman and Corbet in the imprint, and with Johnson's Preface unpaginated; 8 volumes, 8vo, engraved portrait frontispiece of the bard in vol. 1 by George Virtue (after Droeshout, according to Fleeman; after Chandos according to Jaggard and Courtney & Smith), full contemporary calf neatly rebacked, black morocco labels on spines; very good. "By the time the edition appeared in 1765 Johnson had been working on it, on and off, for twenty years ... His most important preliminary work was the Dictionary. In the late 1740s Johnson read the complete works of Shakespeare in Warburton's 1747 edition, and marked out over 20,000 words, the meanings of which he found well illustrated in their Shakespearean contexts. Johnson says in the Preface to the Dictionary that he took 'the diction of common life' from Shakespeare; by arranging it and defining it, Johnson gave us, according to Bertrant Bronson, 'a diffused and unheralded [but] major work of Shakespearean scholarship'. The edition of Shakespeare is not merely a spin-off from the Dictionary, but it belongs to the same series of projects on the history of learning - some completed and some only planned - that runs throughout Johnson's life from the proposed edition of Poliziano and the translation of Paolo Sarpi, through the Harleian Catalogue and the Dictionary, to Shakespeare and the Lives of the Poets" (DeMaria, pp. 218-19). This edition includes the first printing of Shakespeare's will. Chapman & Hazen, pp. 146-7; Courtney & Smith, pp. 103-4; Fleeman 65.10SP/1; Jaggard, p. 501; Pforzheimer 911g. (Inventory #: 46389)
$6,325.00 add to cart or Buy Direct from
rulon-miller books
Share this item