Incidents of travel in Central America, Chiapas, and Yucatan 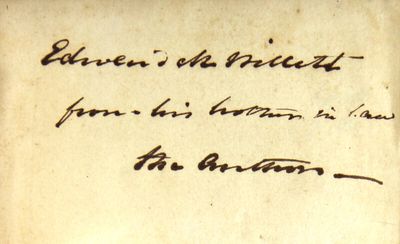 by Stephens, John L.
New York: Harper & Bros, 1841. First edition, 2 volumes, 8vo, pp. [2], viii, 424; vii-[x], [7]-474; folding map, 68 engraved plates (2 double-page) and plans, many after Frederick Catherwood, a few illustrations in the text; original brown cloth with gilt stamped covers and spines, light wear at the spine extremities, some mild dampstaining to the covers of both volumes, but in all, a very good, sound copy. This copy with a rare inscription from the author to "Edward M. Willett, from his brother-in-law, the author." Prior to his excursions into Mesoamerica, Stephens traveled extensively in Europe and wrote two books of travel about his experiences there. While in Naples he met Dr. Marinus Willet. The doctor was the brother of Edward M. Willet, Stephens' classmate and close friend at Columbia, who became his brother-in-law upon marrying Amelia Ann, the older sister of John. Inscribed copies are very uncommon. There has been no such copy of any Stephens title at auction since before 1975. A book full of many interesting archaeological firsts, including the first accurate map of the Yucatan, the first illustrations of Mayan sites, the first descriptions of 44 ruined sites, and the first publication of Juan Perez's A True Exposition of the Method Used by the Indians for Computing Time. Field 1426 (citing the 12th edition); Sabin 91297. (Inventory #: 46450)
$8,625.00 add to cart or Buy Direct from
Rulon-Miller Books
Share this item