The Child's Book of Nature for the Use of Families and Schools intended to aid Mothers and Teachers in Training Children in the Observation of Nature In Three Parts. Part III - Air, Water, Heat, Light, etc. 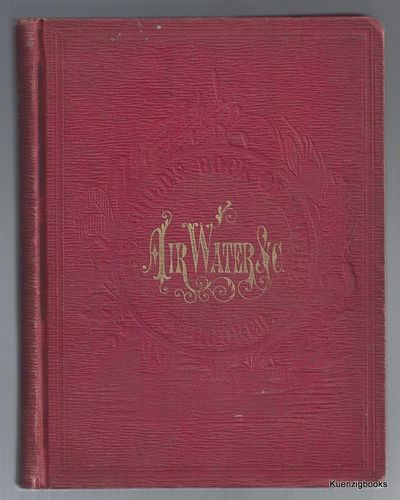 by Hooker, Worthington
New York: Harper & Brothers, Publishers, 1857. First Edition. Cloth. Very Good. First Edition. viii, [9]-179 pages. 5 1/4 x 6 7/8 inches. Red cloth with stamped decoration in blind and gilt, spine lettering in gilt. Many illustrations in the text, mostly of experiments or apparatus. Yellow endpapers. Covers soiled, tiips worn, scattered foxing and soiling. Cloth. "Worthington Hooker [1806-1867] was an American physician, born in Springfield, Massachusetts...He graduated Yale University in 1825 and Harvard University with a degree in Medicine in 1829. He practiced in Connecticut until 1852. Afterwards, he was professor of the theory and practice of medicine at Yale. He was vice president of the American Medical Association in 1864." (-wikipedia). Hooker wrote a number of educational texts for children, including the "Child's Book of Nature", First Book of Chemistry, over time expanding his topic areas into medicine and targeting a broader range of ages, all presented in a straightforward easy to understand format.

This book is one of three in the series "Child's Book of Nature" (Part I. Plants. Part II. Animals. Part III. Air, water, heat, light, &c.) Hooker notes in his introduction that the topics presented here, Air, Water, Heat, Light, etc were intentionally placed last because they are harder to understand. They are typically included under the umbrella of "Natural Philosophy". He suggests that even advanced scholars might find this treatment preferable to some of basic texts due to the way he introduces the material - in simple terms, building one upon the next. Many experiments are presented to help illuminate the concepts discussed.

OCLC/Worldcat notes 3 copies of the series bound in a single volume. Printed separately (as here) and in the original cloth, even less common, with only 2 copies noted as of this listing. This "part" was also published in 1885 in a revised, expanded edition. Getting harder to find in the original cloth. (Inventory #: 23228)
$83.00 add to cart or Buy Direct from Kuenzig Books
Share this item