The Lesbian Tide; a feminist publication, written by and for the rising tide of women today [aka The Tide] vol. 8, #1 [states 5 incorrectly] July/August 1978; Holly Near challenges straight bigotry 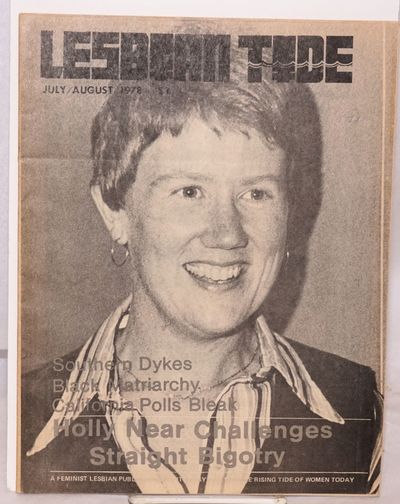 by Cordova, Jeanne, Holly Near, Martie Andrews, Becky Bailin, Bridget Overton, et al.
Los Angeles: The Tide Collective, 1978. Magazine. 40p. including covers, 8.25x11 inches, illustrations, newsprint stock, very good magazine in pastebound pictorial wraps. AKA The Tide. This was the first national lesbian-oriented newspaper in the US. It began in 1971 as a newsletter for the Los Angeles chapter of the Daughters of Bilitis but the editor Jeanne Cordova and other editorial staff decided to take a more radical stance and split from the DOB in December of 1972. They toyed with renaming the magazine/newspaper simply The Tide in 1973 but returned almost immediately to Lesbian Tide. (Inventory #: 192570)
$20.00 add to cart or Buy Direct from Bolerium Books
Share this item