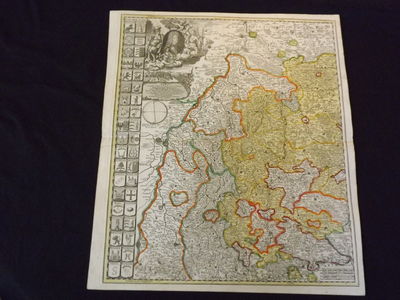 by Homann, Johann Baptist.
Engraved double page (23 1/2" x 20 1/2 "), partially hand colored, large title uncolored cartouche in upper left corner. One sheet of a two-sheet map but has a complete appearance. Expert repairs on verso at centerfold, slight aging and browning; otherwise about near fine with a strong impression. Johann Baptist Homann (1663-1724) was considered the father of German mapmaking, and in 1715 was actually appointed the Geographer to the Emperor. He founded his mapmaking business in 1702, and he would produce several major atlases between 1707 and 1716. This is a detailed and attractive map of part of the southwestern part of Germany that includes Wuerttemberg. While the map is one sheet of a two-sheet map, it has a complete appearance, and an elaborate title cartouche. Our inventory includes both sheets, but as separate maps. Van De Gohm: Antique Maps. Bagrow: History of Cartography. (Inventory #: biblio9)
$350.00 add to cart Available from
Nicholas D. Riccio, Rare Books
Share this item
Nicholas D. Riccio Rare Books & Prints
Offered by