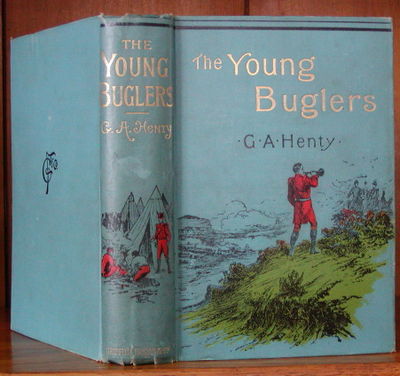 by Henty, G.A.
1891. A Tale of the Peninsular War. With Eight Illustrations by John Proctor and Eleven Plans of Battles. London: Griffith Farran & Co., n.d. Original aqua blue cloth pictorially decorated in black, green and red, all page edges gilt. Early edition of Henty's third book for boys -- an edition not specifically cited by Newbolt. This title was originally published in late 1879 (but dated 1880) by "Griffith and Farran". In 1887 and again in 1891 (but both undated), there were editions published by "Griffith, Farran, Okeden & Welsh" -- the latter of which appeared soon thereafter in this glorious pictorial binding. (Newbolt speculates that this binding was issued for that purpose -- to stimulate sales by imitating the handsome Henty bindings then being produced by the rival publishing firm Blackie & Son.) The closest entry in Newbolt to this one is 7.4 -- as it describes this binding (though the cloth is "olive-green"), but with GFO&W on the title page. The Newbolt supplement lists a "7.4-A" which is closer still to this copy -- as that entry has "Griffin Farran & Co." on the title page (as here); however, that entry mentions that although the printer's slug on the final page of text is identical to this copy's ("Gilbert & Rivington, Ld., St. John's House, Clerkenwell Road, London", on that copy it is followed by a date in 1891 whereas this copy bears no such date. Suffice it to say that this is an early reprint of the first edition, probably from 1891-1892. This is a fine, bright copy -- and is extremely scarce thus. See Newbolt 7.4 and 7.4-A. (Inventory #: 12814)
$475.00 add to cart or Buy Direct from
Sumner & Stillman
Share this item

1892
(click for more details about YVERNELLE. A Legend of Feudal France)

1871
(click for more details about Autograph Letter Signed, addressed to "Theodore Roosevelt Esq. | Chairman, etc.)
View all from this seller>