THE LARK (2 volumes, complete as issued) 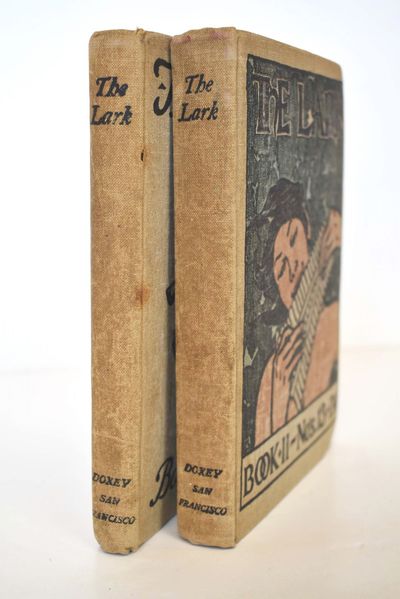 by Burgess, Gelett (Editor)
San Francisco: William Doxey (C.E. Murdock & Co. for issue No.1), 1897. VG overall, some issues with individually roughly opened pages, but not many.. Printed color publishers' cloth iwth design (age yellowed). 2 Volumes. (Book I, Nos. 1 - 12; Book II, Nos. 13 - 24 + Epilark issue). First edition, second issue with the Doxey imprint. Complete, with collective title-page and contents pages at front. Illustrations throughout mostly by Gellett Burgess, but also some by Florence Lundberg, Ernest Peixotto, Willis Polk & Reginald Rix. Volume 1 is inscribed by Burgess, and Volume 2 has a glued in piece of paper with his holograph statement "Yes I wrote the Purple Cow, I 'm sorry now I wrote it, but this I can tell you anyhow, I'll kill you if you quote it! Gelett Burgess." Original pictorial brown cloth stamped in black, green, and brown. Complete set (25 issues) of the humourous little magazine put out by "Les Jeunes", the fin-de-siecle band of San Francisco aesthetes which included Ernest Peixotto, Porter Garnett and Gelett Burgess. The first issue contains Burgess' famous nonsense poem "The Purple Cow", and it was fitting that when The Lark ceased publication with issue 25 in 1897, he inscribed the lines aforementioned. (Inventory #: 146769)
$1,050.00 add to cart or Buy Direct from Mullen Books
Share this item