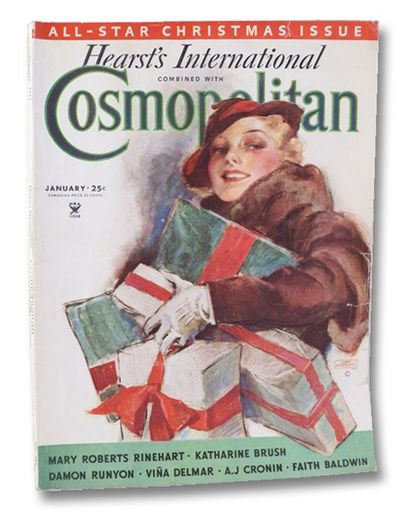 by Baldwin, Faith; Delmar, Vina; La Farge, Oliver; Carrel, Bart; Tuckerman, Arthur; Brown, Royal; Kantor, MacKinlay; Cronin, A.J.; Runyon, Damon; Kyne, Peter B.; Brush, Katharine; Douglas, Lloyd C.; Corcoran, William; Rinehart, Mary Roberts; Hanighen, Frank;
International Magazine Company, Inc, 1935. Magazine. Very Good. LaGatta, John. A few faint corner creases, closed tear on rear wrapper along spine base. 1935 Magazine. 170 pp. 11 1/2 x 8 1/2. John LaGatta illustration on front wrapper, Lucky Strike cigarette advertisement on rear wrapper. Color and black & white advertisements, photographs, and illustrations throughout. Cosmopolitan Magazine was founded in 1886, and purchased by William Randolph Hearst in 1905, who merged it with another smaller publication he owned in 1925. It was called 'Hearst's International Combined with Cosmopolitan Magazine' until 1952, the year after Hearst's death. During this period it published the first appearances of many novels and short stories by notable authors, some complete within one magazine, others as serials. Includes: a complete short novel: Career by Faith Baldwin; nine short stories: The Innkeeper's Wife by Vina Delmar; The Goddess Was Mortal by Oliver La Farge; A Matter of Money by Bart Carrel; Some Day I May Surprise You by Arthur Tuckerman; Love and Vacuum Cleaners by Royal Brown; Mountain Music by MacKinlay Kantor; Christmas for Agnes by A.J. Cronin; Breach of Promise by Damon Runyon; Without Benefit of Jury by Peter B. Kyne; three serials: Don't Ever Leave Me by Katharine Brush; Green Light by Lloyd C. Douglas; Blow, Desert Winds! by William Corcoran; seven articles: The Lighted Candle by Mary Roberts Rinehart; Dictators: American Style by Frank Hanighen; Five Years... What Have They Done to Us? by a Symposium of Famous Americans; The Best Gift of All by Mrs. George B. Simmons; Hollywood is My Home Town by Louella O. Parsons; No, Santa Didn't Bring Me That Bobsled! by O.O. McIntyre; Diamond Jim by Parker Morell; one special feature: At the Metropolitan Opera by McClelland Barclay & Deems Taylor. (Inventory #: 2036634)
$60.00 add to cart or Buy Direct from
Yesterday's Muse
Share this item
Yesterday's Muse, Inc.
Offered by

Myths and Legends of the Hindus and Buddhists

Norwalk, Connecticut : The Easton Press , 1997
(click for more details about Myths and Legends of the Hindus and Buddhists)
View all from this seller>