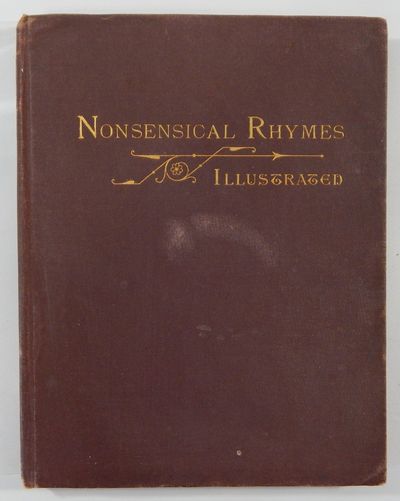 by (Ross, Charles Henry)
New York: Hurd and Houghton, 1867. First US edition. Hardcover. Near fine. Square 8vo. 91,(1) unnumbered pages. Printed in red and black throughout with illustrations on every other page in red and black after J. V. Barnett.

This is a compilation (and a U.S. pirated edition?) of two of Dean's London publications: "Rummical Rhymes and Pictures", which, according to Arthur Deex, was published in 1862; and " Ye Comical Rhymes of Ancient Times Dug Up into Jokes for Small Folk", 1864. The "Bookselelr" of September 30, 1864, attributed authorship of the verses to Charles Henry Ross; the illustrations are signed in the Dean editions by "JVB"; i.e., J. V. Barnett. His initials have been removed from the American illustrations.

Part one is an alphabet book; each letter is somehow part of the illustration as well as the nonsense verse: There was a Young Lady of Cork, Who declining to eat with a Fork, Her Fingers would use, And the feelings abuse, Of the delicate people of Cork.
Each letter of the alphabet has its own illustration and verse except I & J and V & U, which are each combined.

The second half of the book seems to be a printing of the "Ye Comical Rhymes of Ancient Times", also with a page for the verse, with the red and black illustration facing: Hokee Pokee! Hankee Pankee! I'm the Queen of Swinkee Swankee! And I'm pretty well, I thankee!

New York : The Viking Press , 1952
(click for more details about East of Eden)

The Lion, the Witch and the Wardrobe

New York : Macmillan Company , 1950
(click for more details about The Lion, the Witch and the Wardrobe)
View all from this seller>