STATE RIGHTS. THE JOINT RESOLUTIONS AND REPORT, TO THE OHIO LEGISLATURE, AGAINST FEDERAL CONSOLIDATION: SESSION 1859 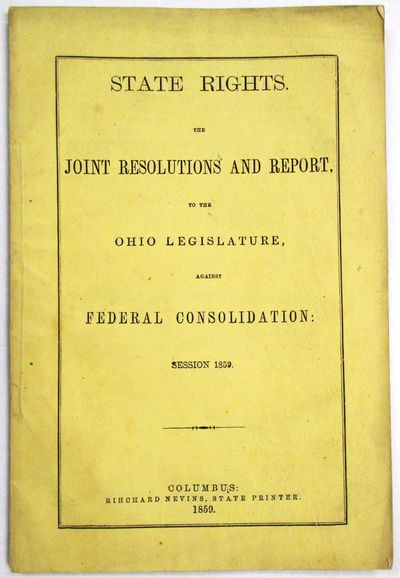 This rare pamphlet raises the banner of State Rights, opposing perceived federal "consolidation" and "encroachment" resulting from enforcement of the Fugitive Slave Act, a much-loathed part of the Compromise of 1850. Sounding like outraged, hot-blooded South Carolinians, Ohioans insist that "the whole sacred edifice of our confederation is supported by the separate and distinct, but consenting pillars of thirty-three sovereign and independent States." The Report describes a "complete nullification of State rights and sovereignty"-- the Clark County fugitive slave case. Federal marshals sought to arrest a Negro who, with the help of others, resisted. They were all arrested, but procured a writ of habeas corpus from a State judge, freeing them. A federal writ, issued at the behest of U.S. officials, then overturned the State court writ. To add insult to injury, federal marshals arrested the state judge who had issued the habeas, the sheriff who attempted to serve it, and the lawyer who had sought the State writ.
Other horribles, demonstrating "aggressions" and "encroachment of the federal government upon State rights," are enumerated, with a plea that "recurrence to the fundamental principles of civil government is absolutely necessary to preserve the blessings of liberty." OCLC locates only the copy at the Huntington, as of November 2014, with plenty of Kirtas Technologies facsimiles.
OCLC 228711849 [1]. (Inventory #: 31564)
$500.00 add to cart or Buy Direct from
David M. Lesser, Fine Antiquarian
Share this item
David M. Lesser, Fine Antiquarian Books LLC
Offered by