LITERATURE OF THE ABOLITION YANKEE. AN ADDRESS BY JAMES P. SHUNK, ESQ., OF YORK. DELIVERED AT BEDFORD, PA 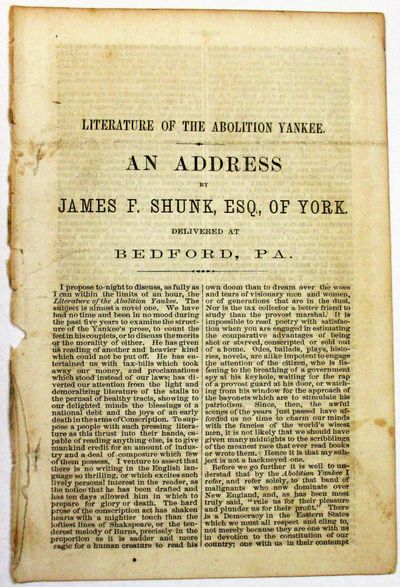 Early in Reconstruction, Shunk delivers a bitter, sarcastic attack on the "Abolition Yankee," i.e., "that band of malignants who now dominate over New England, and, as has been most truly said, 'rule us for their pleasure and plunder us for their profit'." Unlike noble Unionists like Pennsylvania's Andrew Curtin, 'Abolition Yankees' are "the most ferocious and lawless majority that ever held a land under its heel."
Shunk denounces everything about abolitionists, including "the artistic exaggeration and pathetic painting of Uncle Tom's Cabin." Indeed, "The 'party of freedom,' as they still style themselves, proved to be the party of slavery, whose shackles bound the wrists of their own race."
OCLC 480616241 [1- NYHS], 48156386 [1- Yale], 15170375 [2- U GA], as of October 2019. LCP 9403 records the Bedford, Pa., printing. Not in Bartlett or Sabin. (Inventory #: 31654)
$500.00 add to cart or Buy Direct from
David M. Lesser, Fine Antiquarian
Share this item
David M. Lesser, Fine Antiquarian Books LLC
Offered by

AUTOGRAPH LETTER SIGNED, TO GENERAL SAMUEL MILROY, CONCERNING THE TYLER ADMINISTRATION AND THE POSSIBILITY OF TYLER'S APPOINTMENT OF MILROY TO A POLITICAL OFFICE

White Sulpher, Kentucky 1842
(click for more details about AUTOGRAPH LETTER SIGNED, TO GENERAL SAMUEL MILROY, CONCERNING THE TYLER ADMINISTRATION AND THE POSSIBILITY OF TYLER'S APPOINTMENT OF MILROY TO A POLITICAL OFFICE)
View all from this seller>