[An Archive of Letters from Director Robert Lewis re: Loos's Work on Adapting CHÉRI] 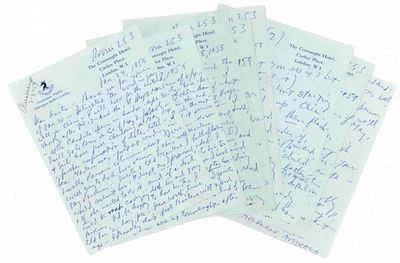 by Loos, Anita [recipient]
London, Liverpool, etc., 1959. Ten autograph letters, signed ('Billy' or 'B'), 22 pages, octavo; two autograph notes, signed; two autograph postcards, signed. Each bearing the rubberstamp "From The Estate of Anita Loos," but very good. A good and affectionate sequence of letters from Lewis to Loos, who was then engaged in the adaptation of Colette's CHÉRI and THE LAST OF CHÉRI to the stage. Lewis directed Kim Stanley and Horst Buchholz in the play during its two month run at the Morosco Theatre. Through much of period of the correspondence, Lewis is partially preoccupied with rehearsals and the opening for his current production in London (Hellman and Bernstein's CANDIDE, which opened in London in April), but while pressed for time, focuses too on his reading of Loos's drafts in progress, meetings with potential cast members and negotiations with Buchholz, his own conceptions of the stage presentation, and other nuts and bolts issues. His letters anticipate his return to New York in May, "when we can then go right into collaboration ...." Accompanied by typed transcripts of five of the letters, a copy of PLAYBILL for the production, and a catalogue for an exhibition drawing on Lewis's papers at Kent State, 1991- 2. Lewis (1909-1997) was a founding member of the Group Theatre, founder of the Actors Studio, and eventually became Chairman of the Yale Acting and Directing departments in the 1970s. (Inventory #: WRCLIT73342)
$550.00 add to cart or Buy Direct from
William Reese Co. - Literature
Share this item

The News and the Weather," contained in ACCENT A QUARTERLY OF NEW LITERATURE

Urbana, IL 1941
(click for more details about The News and the Weather," contained in ACCENT A QUARTERLY OF NEW LITERATURE)
View all from this seller>