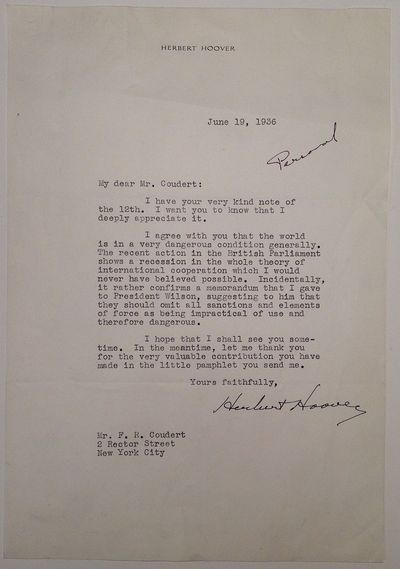 by HOOVER, Herbert (1874 - 1964)
1936. unbound. 1 page, 10.5 x 7.25 inches, no place, June 16, 1936. Written to Frederic R. Coudert, a powerful New York attorney, whose firm represented Great Britain's interests in North America for almost a century, giving his views on the latest chapter of British appeasement towards Nazi Germany, in part: "...I agree with you that the world is in a very dangerous condition generally. The recent action in the British Parliament shows a recession in the whole theory of international cooperation which I would never have believed possible. Incidentally, it rather confirms a memorandum that I gave to President Wilson, suggesting to him that they should omit all sanctions and elements of force as being impractical of use and therefore dangerous..." Hoover strongly opposed the severe sanctions levied against Germany in the Versailles Treaty and felt that its vindictive nature would result in another World War. Natural folds and several creases; very good(-) condition. (Inventory #: 256043)
$650.00 add to cart or Buy Direct from
Argosy Book Store
Share this item

London : Tallis, John , 1857
(click for more details about Turkey in Asia)
View all from this seller>