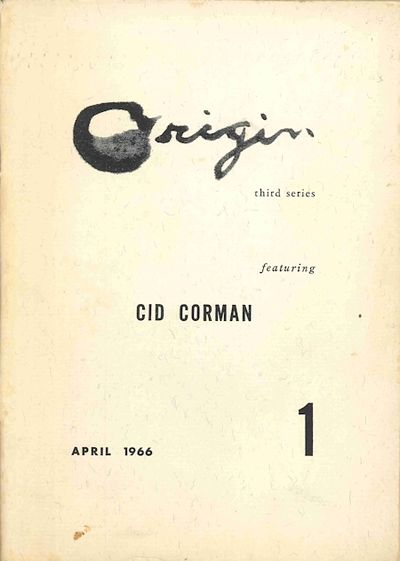 by Corman, Cid [ed & contributor]
Kyoto, 1966. Third Series, number 1. Printed wrappers. Short edge tear at top of rear wrapper, a few smudges and a small spot to off-white wrappers, else very good. Edited and published by Cid Corman. Publication was generally quarterly, and distribution non-commercial. Corman's ORIGIN was among the most vital and interesting of American periodicals devoted to contemporary poetry and translations. The format of featuring a specific author in each issue was persistent. One thousand copies of the first number were printed, but the editions were subsequently much smaller; for the second and third series, 300 copies of each issue were printed (or 200 for the latter according to A&K). Corman's own work, as well as letters between Corman and W.C. Williams, appear with Sackheim's "small anthology of the Blues." WALLACE C632. CLAY & PHILLIPS, pp.112-3. ANDERSON & KINZIE, pp.720-1. (Inventory #: WRCLIT73357)
$30.00 add to cart or Buy Direct from
William Reese Co. - Literature
Share this item

The News and the Weather," contained in ACCENT A QUARTERLY OF NEW LITERATURE

Urbana, IL 1941
(click for more details about The News and the Weather," contained in ACCENT A QUARTERLY OF NEW LITERATURE)
View all from this seller>