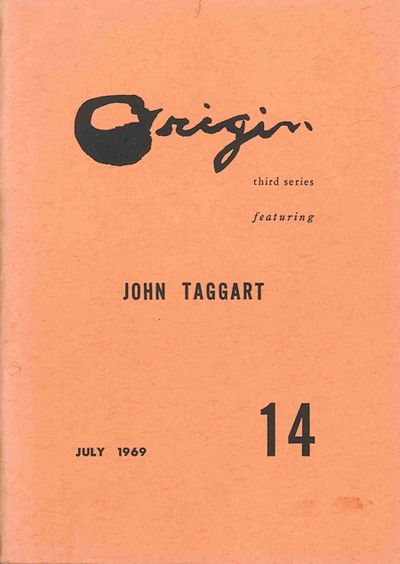 by Taggart, John [contributor]
Boston, 1969. Third Series, number 14. Printed wrappers. Spine a trace sunned, two short edge tears to wrappers; very good. Edited and published by Cid Corman. Publication was generally quarterly, and distribution non-commercial. Corman's ORIGIN was among the most vital and interesting of American periodicals devoted to contemporary poetry and translations. The format of featuring a specific author in each issue was persistent. One thousand copies of the first number were printed, but the editions were subsequently much smaller; for the second and third series, 300 copies of each issue were printed (or 200 for the latter according to A&K). Taggart is showcased, along with Greene, Faust, Eigner, Bronk, et all. CLAY & PHILLIPS, pp.112-3. ANDERSON & KINZIE, pp.720-1. (Inventory #: WRCLIT73359)
$25.00 add to cart or Buy Direct from
William Reese Co. - Literature
Share this item

A BIBLIOGRAPHY OF SAMUEL TAYLOR COLERIDGE

Philadelphia : Printed for Private Circulation , 1903.
(click for more details about A BIBLIOGRAPHY OF SAMUEL TAYLOR COLERIDGE)

SOME EXPERIENCES OF AN IRISH R. M.

New York : The Derrydale Press , 1927.
(click for more details about SOME EXPERIENCES OF AN IRISH R. M.)
View all from this seller>