THE COUNTER-SCUFFLE. WHEREUNTO IS ADDED THE COUNTER-RAT WRITTEN BY R.S 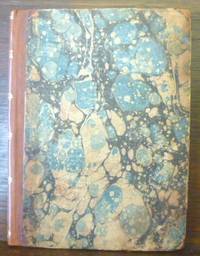 by (SPEED, ROBERT)
London: Printed By J.C. For Andrew Crook, 1670. Rebacked over earlier marbled boards. Notes in an old hand on front pastedown regarding research of the book. Title-page has been repaired quite some time ago with 1" chip from the free edge. Title-page vignette and full-page illustration preceding the "Counter-Rat". Edges were trimmed at some point long ago with loss of a few headliners. (See photos). This is an example of a "mock-poem", first published in 1621?, and went through 19 editions by the end of the century. It employs octosyllabic triplets with intermittent trisyllabic lines and numerous doggerel tricks. The story of a food fight during Lent supper in the Wood Street Counter or Compter (a debtors' prison in London) related in a raucous mock-heroic style. See Raylor, "Cavaliers, Clubs, and Literary Culture", pp.126-27, 1994. Also cited in Wing S 4895. A scarce piece of 18th century English printing. . Later Edition. Half Brown Calf. General Cover and Corner Wear/No Jacket. Thin Small Quarto. (Inventory #: 013648)
$750.00 add to cart Available from Glenn Books
Share this item
Glenn Books
Offered by