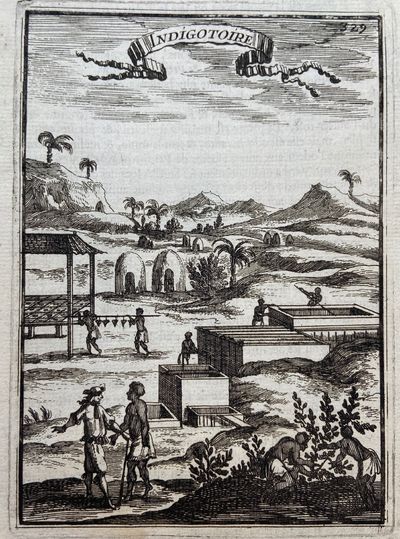 by MANESSON-MALLET, Allain
Paris: Denys Thierry, 1683. unbound. Miniature view. Copper plate engraving with hand coloring. Image measures 6.25 x 4". Sheet measures 8.25 x 5.75". This miniature view shows the cultivation of indigo plants in the Caribbean. In the foreground, two slave workers tend to a group of plants, while another talks with a European colonist. Other workers in the background carry drying racks and tend to irrigation wells. Palm trees and mountains in the background give an idea of the terrain and environment suited to this sought-after crop. A banner bearing the image's title flutters in the air above the scene. The map appeared in the French edition of Manesson-Mallet's "Description de L'Univers" and bears the text "De L'Amerique Figure CLV." in the top margin. It is in good condition with minor discoloration at the edges. Allain Manesson-Mallet (1630-1706) advanced from his position of musket bearer under Louis XIV to eventually occupy the position of "maitre de mathematiques" to the French King. He was the author and engraver of "Description de L'Univers," a five-volume survey of the world that included maps of the ancient and modern world, star maps, illustrations of flora and fauna, and information on the customs, religion and government of the many nations included in the text. At the time, the text was the largest and most comprehensive work of its kind ever published. Intended to entertain its readers, Mallet's "Description" was a time capsule of the 17th-century world that captured and displayed it in all its splendor. (Inventory #: 255486)
$100.00 add to cart or Buy Direct from
Argosy Book Store
Share this item