Waves and Particles [ IN Science, The Weekly Journal of Devoted to the Advancement of Science ] 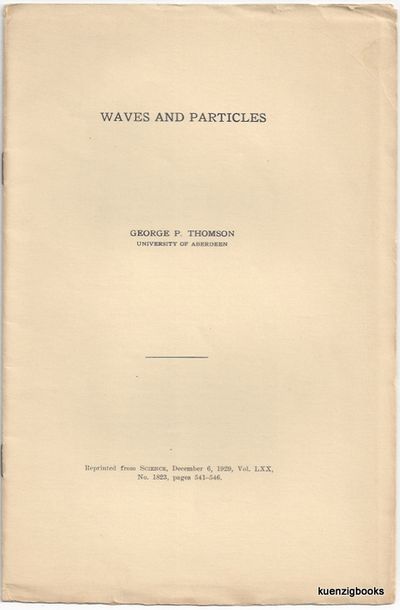 by Thomson, George P.
[ New York City, Lancaster, PA and Garrison, NY ]: [ The Science Press ], 1929. First Edition. Wraps. Near Fine. First Edition. 15 pages. 8vo. Tan printed wrappers. Minor wear at the extremities. The offprint issue from Science, December 6, 1929, Volume LXX, No 1823, pages 541-546. Wraps. Sir George Paget Thomson (3 May 1892 - 10 September 1975) was an English physicist who together with Clinton Davisson was jointly awarded the Nobel Prize in Physics in 1937 "for their experimental discovery of the diffraction of electrons by crystals."

The offprint contains the text of the First Baker Lecture, given by Thomson at Cornell on Tuesday, October 8, 1929. The Baker lectures are "The oldest and one of the most prestigious series of endowed lectures sponsored by a chemistry department at an American university."(Cornell website) Thomson took great pains to explain his work and the quandry's it posed in terms that the average person could understand.

"Prof. L. M. Dennis, head of the Department of Chemistry, in explaining the nature of Professor Thomson's lecture made the following statement: "If a speck of dust could be sufficiently magnified, the science of chemistry has shown that it would appear as a cloud of atoms. Physics has demonstrated that every atom has parts — electrons. What are these electrons? Are they Just points, or have they an extended form? Professor Thomson will explain some recent researches which try to answer these questions and which point to the curious result that waves form a fundamental basis for the structure of the world." (from the Cornell Daily Sun, Volume L, Number 12, October 5, 1929. (Inventory #: 23900)
$193.00 add to cart or Buy Direct from Kuenzig Books
Share this item