1879. "The Mississippi Plan." 1880. The States. A weekly newspaper published at Okolona, Mississippi ... as a representative of the southern democracy, it speaks its sentiments in words as hard as musket-balls. A. Y. Harper and W. H. Kernan, editors.. 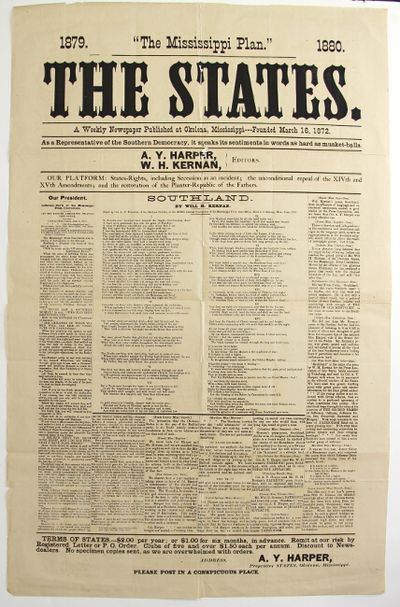 by Kernan, William Hubbard, & A. Y. Harper
Okolona, Miss, 1879. Large folio broadside, approx 25" x 16", large bold ornamental type; the poem "Southland" centered within 6 columns of dense text; a few short breats at the folds, else very good. An annual subscription advertisement for 1879/1880 to The States, an ultra-extremist journal that advocated for the unreconstructed South: "Our platform: state's rights, including secession as an incident; the unconditional repeal of tye XIV and XV Amendments; and the restoration of the planter-republic of the fathers." The paper was founded in 1872 by two men, one an ex-Confederate officer, the other, Kernan, a northern journalist and poet with deep Southern sympathies. By this time, thanks to Kernan, it had become a leading voice for the "Mississippi Plan," feature here in the masthead, which was sworn to obliterate the 14th and 15th amendments. Harper gets top billing, but it was Kernan who gave the paper its notoriety. Kernan (1845-1905) would have been a leading Copperhead were he old enough at the time. As it was he turned to journalism after graduating from the University of Michigan Law School, taking charge of states-rights Democratic papers in Ohio and Indiana. Deeply sympathetic to the South, he followed his passion and relocated in 1875 to Mississippi where he took charge of The States. "That prodigy of Southern journalism, under the magical utterances of his pen, displayed a boldness and intensity of expression perhaps...never excelled by any American paper. It was the subject of grave discussion in Congress...No such flaming meteor ever blazed across the political heavens...In a short period this hitherto obscure village journal ran up to more than ten thousand circulation." (Clymer). Kernan left the paper around this time and in late 1880 started a paper in Memphis, The Solid South. Kernan was also a serious and versatile poet. His 16-stanza poem, "The Southland" is printed here side-by-side with Jefferson Davis's speech to the Mississippi Press convention in 1879, "Let the Bastard Democratic Traitors Take Notice," printed in a column headed "Our President." Kernan's poetry was collected and published in a 270-page book, The Flaming Meteor: poetical works of Will Hubbard Kernan..., in 1892, by Charles Kerr in Chicago, with a long biographical introduction by John R. Clymer, who describes Kernan as a "fierce, scathing, sarcastic political writer." As for his poetry: "After Edgar Allen Poe, the most brilliant poetic genius this country has produced...It is only by reason of his pronounced Southern principles that he has been ignored by the literati of Boston and New York..." We leave it to others to decide. But Clymer was not alone. Harris Dickson, a popular Southern author, wrote in "An Appreciation" of Kernan published in the Bookman, Jan. 1915, pp. 522-524, that "Few men have spoken their sentiments in verse 'so hot and hissing as a musket ball upon the wing.' No poet of any era has ever grovelled more deeply in the abyss of pessimism and then proven himself capable of rising to super heights of exaltation..." Not in OCLC which lists a similar 1880/1881 broadside with more or less the same text at New York Historical Society. (Inventory #: 46384)
$1725.00 add to cart or Buy Direct from
Rulon-Miller Books
Share this item