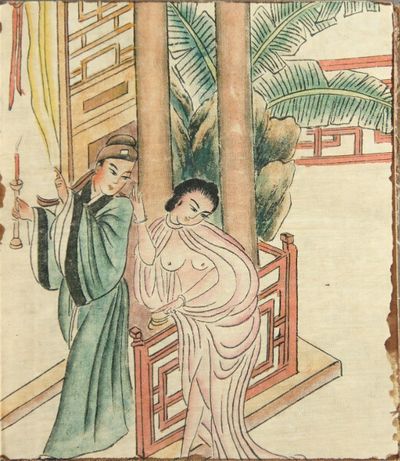 [n.p. (China)], n.d.. Accordion Chinese binding, 16.6 x 14.5cm., 12 color paintings on cloth backed by thick card; sheep covered boards, paper title label on upper board. Some staining at edges and gutter caused by application of paint to edges. Very good. This album of erotic images show lovers engaged in amorous pursuits with the background detail of the surrounding garden or interior attractively rendered. The female lover's bound feet are visible in some of the images. These albums of Chinese erotic images, which are often referred to as 'Spring Palace Pictures', appear to have had multiple uses. In John Byron's informative book 'Portrait of a Chinese Paradise. Erotica and Sexual Customs of the Late Qing Period' (London, 1987) it is stated that contrary to the commonly held belief that they were produced as tools of instruction, in fact, this was only one of their purposes. Interestingly these images are sometimes referred to as "Avoid Fire Picture" as there was, and may still be in some rural areas in China, a belief that to store such images in the roof of your house would protect the building from destruction by fire. In other words these albums were commonly believed to bring good luck. The special power of these images appears to come from their connection with fertility. Precise dating of these albums is often not possible and it is quite likely that these images were copied from an earlier work. This example appears to date from the late Qing or Republic Period, and it is quite likely that these images were copied from an earlier work. A nice example of Chinese popular culture. Chinese erotica such as this is infrequently seen in the West, and typically portray gentler, more serene scenes than those often found in its more common Japanese cousin, shunga. (Inventory #: 46535)
$1,437.50 add to cart or Buy Direct from
rulon-miller books
Share this item