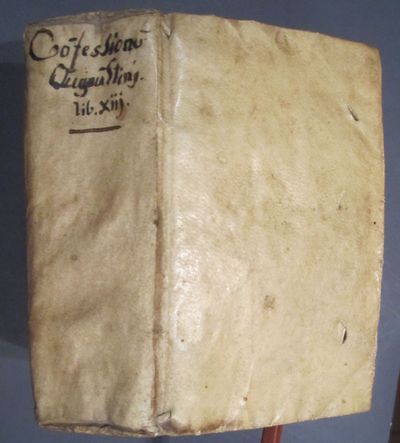 by AUGUSTINUS, Aurelius (354-430)
Rouen: Romain de Beauvais, 1608. 16mo (114 x 78 mm). Collation: A-Z AA-QQ8. [2] ff., "580" [i.e., 569], [51] pp. With pagination errors: p. 188 misnumbered 189; from that page forward odd numbers appear on versos and even numbers on rectos; pp. 520-529 are omitted. Printer's woodcut device on title. Clean tear in gutter of B8 entering text block, the paper of sheets P and Q slightly flawed, P6 with paper flaw affecting text, occasional dampstaining. Contemporary laced-case binding of flexible parchment with a cover lining, pair of slits on each cover for pair of fore-edge ties (lacking ties), title lettered in ink on backstrip, a few lower edges untrimmed; pastedown endpapers detached.*** A pleasant pocket edition of the Confessions of Saint Augustine, printed in Rouen, no doubt aiming at the English Catholic market. The Confessions were a "recusant favourite" (Westminster Dictionary of Christian Spirituality, 1983, p. 85). The text was not yet available in English: Sir Tobie Matthew's English translation was published in Saint-Omer in 1620 (and was accused of Popist bias). I locate no other copies of this edition, but a 1609 edition from the same press (USTC 6812674) appears to be a reissue of the same sheets, containing the same mispagination (cf. Bodleian online catalogue of their incomplete copy), with an additional appendix containing a life of Augustine extracted from Baronius' Annales Ecclesiastici (besides the Bodleian copy two French locations are cited by the Catalogue collectif de France: BnF and Valognes in the Manche). (Inventory #: 2679)
$650.00 add to cart or Buy Direct from
Musinsky Rare Books
Share this item