Album of illustrations from printed books and periodicals 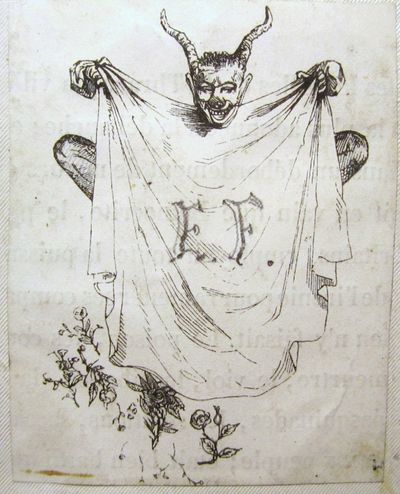 by ROMANTIC BOOK ILLUSTRATION - Baroness DARU
[France, 1855. Oblong album (257 x 333 mm). [55] leaves of thick paper including sheets of blue, green and brown paper, on the rectos and some versos of which are carefully mounted approximately 425 cut-out illustrations from French books and periodicals, most from the 1830s and 1840s (but with 5 eighteenth-century illustrations or vignettes), including three clippings mounted on the moiré front free endleaf; several illustrations are printed on colored paper, two are hand-colored, three are offset(?) proofs on India paper (one with small tear); with two loose unsigned drawings: a watercolor of a landscape, and a pencil drawing of a reclining deer. A few clippings partly detached from mount, overall in fine condition. Bound in dark violet crushed morocco, sides with elaborate gold-blocked foliate and arabesque border and central arabesque and pointillé cartouche, within which the gothic letters "E. F." are stamped on the upper cover, smooth spine gold-tooled to a similar design, white moiré endleaves, gilt edges (a few scratches, upper joint split, lower joint rubbed). Provenance: given by the Baroness Daru to Eugène Hippolyte Forest, with presentation inscription mounted on verso of front free endleaf, "A Monsieur Eugène Forest, souvenir de Madme la Bonne Daru", with his supra-libros, and the initials E.F. inscribed in pencil on the lowermost clipping of the opening page, showing a leering horned devil holding a sheet. A woman's scrapbook of wood-engraved, steel-engraved, and a few lithographed illustrations and vignettes from the heyday of the Romantic period of book illustration in France. It was presented to the artist, engraver and caricaturist Eugène Hippolyte Forest (1808-1891) who had collaborated on many of these publications, by one Baroness Daru, presumably a friend or admirer, possibly the wife of Pierre-Auguste Napoléon Daru, grandson of Napoleon's trusted advisor Pierre Daru. Madame Daru arranged her clippings partly thematically and partly according to purely esthetic criteria. She sacrificed bibliographical accuracy to visual effect; thus a central vignette is in several cases placed within a cut-out title or ornamental border from a different work. As broad as the world of French Romantic graphic art itself, the illustrations include fashion plates, romantic vistas and scenes of foreign lands, city views, monuments, pastoral scenes, melodramatic illustrations for novels or tales, fable pictures, portraits of le beau monde, caricatures, comic vignettes, and satirical prints. One shows a chained black slave on his knees about to be whipped by a white man; the caption reads "Un Républicain modèle / (Scène de moeurs Américaines)." A number of the illustrations come from La Caricature, a satirical weekly directed by Charles Philipon, published from 1830 to 1843, and from the early years of Le Charivari (1832-1937), on which Forest collaborated with Grandville and Honoré Daumier. The opening page has at its center a title-illustration of the Musée pour rire, a three-volume collection published in 1839, containing comic illustrations by Daumier, Gavarni, Grandville and others. Among the signed illustrations are wood engravings after Bellange, Daumier, Gavarni, Tony Johannot, Jules David, Célestin Nanteuil (two large wood-engraved title-page illustrations), and Bertall. The 18th-century vignettes, mounted near the end of the album, include two by Cochin and one by Sébastien Leclerc.  One illustration shows the interior of the Crystal Palace in London, which was completed in 1851. A couple of the clippings bear neat pencil illustrations identifying the scenes: e.g,, La Galerie des Glaces à Versailles, and a wood engraving of an elaborate armoire by Jeanselme, noted to have been shown at the Exposition universelle of 1855: this latter annotation probably signals the album's terminus post quem.  (Inventory #: 2669)
$2,500.00 add to cart or Buy Direct from
Musinsky Rare Books
Share this item

Personal journal of a Parisian scrivener