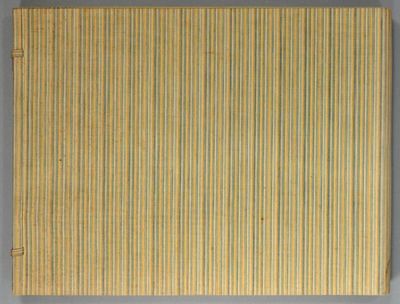 by TSUDA SEIFÛ, designer
1929. [BOOK DESIGN] TSUDA SEIFÛ, designer. SÔTEI ZUAN-SHÛ Dai-Ishu. A COLLECTION OF ARTISTIC BOOKBINDINGS Executed by SEIFU TSUDA. Kyoto, Unsodo, 1929. Oblong folio, decorated cloth, 31.6 X 41.6 cm. Signed by Seifû. Contains examples of the actual woodblock-printed covers of this important book designer's significant bindings. Very scarce item, Seifû was not only a designer, he was also a very important western-style oil painter, as well. In his early years at the turn of the 20th Century, an intimate of the circle around the eminent author, Natsume Soseki, by the end of his life, Seifû was the grand old man of the post-war Japanese art world. This scarce volume is in fine condition, in the original cloth-covered clasped case. This copy is distinguished by the fact that Seifû has written a lengthy Chinese inscription (with some kanbun diacriticals) on the front innner board and front free endpaper. Sealed by him in Showa 48 [1973] when he would have been 83 years old. It would appear that an admirer presented him with this lovely old volume for his calligraphy and he obliged. (Inventory #: 88445)
$2,850.00 add to cart Available from
Boston Book Company
Share this item


(click for more details about Japanese Fairy Tale Series No. 11: The Hare of Inaba (Inaba no Shiro Usagi 因幡の白兎))
View all from this seller>