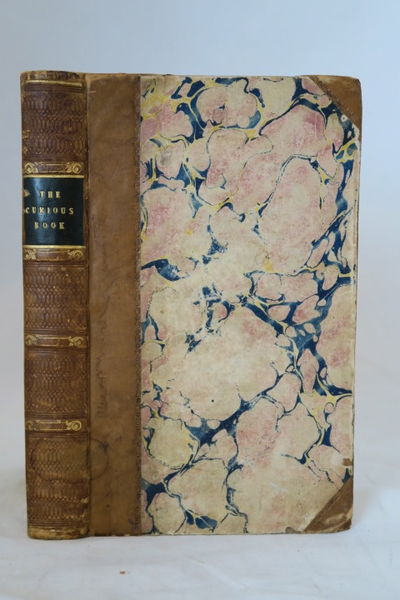 OCLC records ten copies (including a second or variant issue)

by [ANECDOTES]. [Anonymous]
Edinburgh: Printed by John Pillans for John Thomson; and Baldwin, Cradock, and Joy, London, 1826, 1826. First edition. OCLC records ten copies (including a second or variant issue). Some smudges and stains in the text; very good copy.. 8vo, later green half calf, green cloth boards, red morocco label, gilt decorations and lettering, t.e.g., others untrimmed. Half-title and errata leaf present. A collection of almost 90 literary anecdotes, including ones about Burns, Byron, Shelley, Boswell and John Gay, interspersed with occasional miscellaneous pieces, such as the account of the "Hungry Poet" with two of his poems. Almost all the pieces are unsigned, but at least two are attributed: A. Cunningham on the last moments of Roberts Burns and Walter Scott on the "Character of Lord Byron." There was a variant or probably second issue, with the title augmented slightly to The Curious Book; or, Literary Relics. (Inventory #: 26426)
$400.00 add to cart or Buy Direct from
Brick Row Book Shop
Share this item

History of Romances. An Enquiry into their Original; Instructions for Composing them; an Account of the Most Eminent Authors; with Characters, and Curious Observations upon the Best Performances of that Kind . . . Made English by Stephen Lewis

London: Printed for J. Hooke and T. Caldecott, 1715 , 1715
(click for more details about History of Romances. An Enquiry into their Original; Instructions for Composing them; an Account of the Most Eminent Authors; with Characters, and Curious Observations upon the Best Performances of that Kind . . . Made English by Stephen Lewis)
View all from this seller>