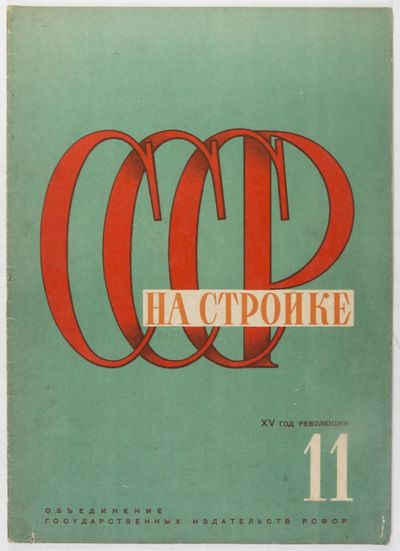 by Pyatakov, Georgy (Editor in Chief); Maxim Gorky, Mikhail Koltsov, et al. (Editorial Board); Boris Ignatovich, Arkady Shaikhet, et al. (Photographs by); Nikolay Ilyin (Design by)
Moscow: OGHIS State Publishing House, 1931. First edition. Softcover. g+. Folio. Unpaginated. [40]pp. Original printed wrappers. Photo-illustrated title page. Founded in December 1929,"SSSR na stroike"'s stated goal was the documentation of industrial construction by means of photography. According to an editorial statement in the premiere Russian issue, the magazine turned to photography as a more objective means of representation that could withstand the attempts of internal and external enemies to discredit the Soviet Union. With contributions by both modernist innovators and proponents of more traditional cultural practices, the deluxe photographic magazine "SSSR na stroike" (USSR in Construction, 1930-1941, 1949) provides a unique opportunity to examine the cultural transition to Socialist Realism and the persistence of modernist visual experimentation. This magazine propagandized the transformation of the Soviet economy, society and culture during the intensiﬁed industrialization drive that began with the start of the First Five Year Plan in 1928, when the Soviet Union sought to transform a backwards, agricultural empire into a uniﬁed industrial state, promising to accomplish in a few years a process which had taken over a century in Western Europe. Illustrated with spectacular photogravures, this issue of "SSSR na stroike" is entirely devoted to Leningrad in construction. Moderate rubbing and slight age-toning on wrappers. Minor water-staining at top inner gutter of pages (not affecting text or images). Upper fore-edge of the last two leaves partly creased, with a 6/8" closed tear. Text and captions in Russian. Wrappers and interior in overall good+ condition. (Inventory #: 39066)
$250.00 add to cart or Buy Direct from
Eric Chaim Kline Bookseller
Share this item