WHERE THE PAVEMENT ENDS 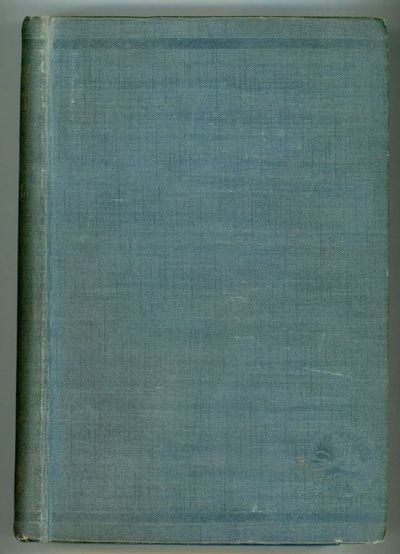 by Russell, John
London: Thornton Butterworth Limited, 1921. Octavo, pp. [1-6] 7 [8-10] 11-319 [320: blank], original blue-gray cloth, front panel stamped in blind, spine panel stamped in gold and blind, bottom edge untrimmed. First British edition. The author's first collection of stories, most with South Seas settings, several with supernatural motifs and dark tones. This collection, first published by Alfred A. Knopf in 1919 as THE RED MARK AND OTHER STORIES, met with an indifferent response in America but was very successful in the UK (possibly because of its strong Kipling-esque quality) where it was published in 1921 by Butterworth as WHERE THE PAVEMENT ENDS with two stories that appeared in the Knopf edition omitted ("The Slanted Beam" and "Meaning -- Chase Yourself"). It was praised by Conan Doyle as "the best book of short tales by any debutant since Kipling's 'Plain Tales.'" "A superlative collection ..." - Queen's Quorum 62. Russell went on to become a very prolific author of short stories (more than 600 published as of 1942). Several have been reprinted in horror anthologies; at least one of the stories here, "Powers of Darkness" (a voodoo tale) is supernatural. Bleiler (1948), p. 241. Hubin (1994), p. 708. Neat contemporary owner's signature dated 10 May 1922 on the front paste-down and his bookplate affixed to the front free endpaper. Pulpy text paper tanned, a very good copy. (#152078) (Inventory #: 152078)
$150.00 add to cart or Buy Direct from L.W. Currey
Share this item
L.W. Currey Inc.
Offered by