BEYOND THE ICE: BEING A STORY OF THE NEWLY DISCOVERED REGION ROUND THE NORTH POLE. Edited from Dr. Frank Farleigh's Diary.. 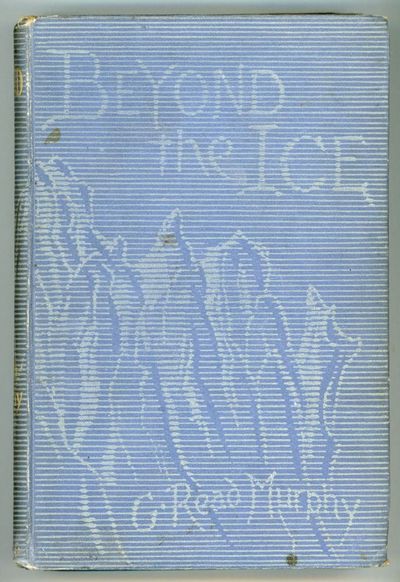 by Murphy, G[eorge] Read
London: Sampson, 1894. Octavo, pp. [i-iii] iv-vi [vii] viii [1] 2-326 [327: printer's imprint] [328: blank], original pictorial blue-gray cloth, front panel stamped in white, spine panel stamped in white and gold, top and fore edges untrimmed, white endpapers with pattern incorporating publisher's monogram printed in gray. First edition. Utopian lost race novel set in "Fregida," a north polar region comprising the nations of Zara, Ura, Gurla, and Roda. Farleigh, the sole survivor of an expedition to the north pole, is taken to Zara, a constitutional republic, and the most advanced of the four nations in all ways. Three of these nations were "founded in the late eighteenth century when a scientific polar expedition, on the brink of death, wandered into the temperate area, which was already peopled by a large population of unknown origin and language ... Among the scientists was one William O'Brien, who set up the state as it now its. Two of his companions set up two other nations ... The nation of Zara gradually expands to include the other three nations - Ura, Roda, and Gurla -- which it transforms to its own cultural pattern. This expansion comes through merger and war, in which bomb-dropping airships are the decisive factor. The novel ends with the unification of the circumpolar nations ..." - Bleiler, Science-Fiction: The Early Years 1592. At the time of Farleigh's arrival, humane liberalism is giving way to ominously simplified "scientific" social thinking and it is determined that "in our community no thing or animal that is detrimental to the general welfare is allowed to increase its species." This policy leads to the ruthless extermination of the Rodas, a primitive race of savages who live on the fringe of the polar communities. Blackford, Strange Constellations: A History of Australian Science Fiction, pp. 25-26; 227. Larnach, Materials Towards a Checklist of Australian Fantasy to 1937 (1950), p. 16. Australian and New Zealand "Lost Race" Fiction in the Collection of Stuart Teitler (private list), p. 2. Miller, p. 650. Locke, A Spectrum of Fantasy, p. 163. Sargent, British and American Utopian Literature, 1516-1985, p. 103. Suvin, Victorian Science Fiction in the UK, pp. 58-59. Bleiler (1978), p. 145. Reginald 10533. Not in Lewis or Negley. Spine ends and corner tips lightly worn, a few spots and rubs to cloth, recto of title leaf and verso of last leaf darkened (offset from endpapers), a clean, tight, very good copy. A very scarce book. (#152044) (Inventory #: 152044)
$1,000.00 add to cart or Buy Direct from L.W. Currey
Share this item
L.W. Currey Inc.
Offered by