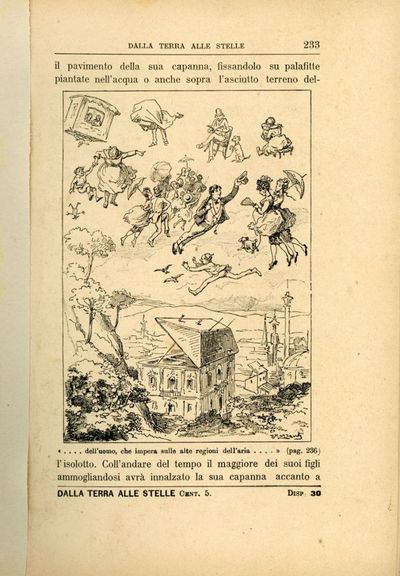 by Grifoni, Ulisse
[Roma: Edoardo Perino, 1890. Octavo, two volumes in one: pp. [1-3] 4-237 [238-239] [240: blank]; [1-3] 4-235 [236-239] [240: blank], profusely illustrated, nineteenth century bind-up in quarter cloth and drab boards. Second edition. Complete in 60 parts. Grifoni's DALLA TERRA ALLE STELLE, an imaginary voyage romance in the style of Jules Verne, first published in 1887, was expansion of his earlier work DA FIRENZE ALL STELLE (Florence: Fieramosca, 1885). "In Grifoni's DALLA TERRA ALLE STELLE, a Florentine student known only as Alberto C. is suffering despair after poor grades and a love affair gone wrong. He quits his literary studies and takes up chemistry, and after experimenting with various chemical combinations, accidentally discovers a type of paint that nullifies gravity. Alberto and his friend Professor Sandrelli build a ship, the 'Casa Volante,' in which they travel around the world. After visiting Africa and the Pacific Ocean, they fly off into space and land on Mars where they find tiny human inhabitants. The two travelers eventually return to Earth, landing the ship in the sea near the North Pole, where it sinks." - Howgego, Encyclopedia of Exploration: Invented and Apocryphal Narratives of Travel G27. A sequel, NELLE STELLE, was announced but never appeared. Anatomy of Wonder (1987) 6-309. Printed on pulpy paper, the parts are in very good condition overall; the insubstantial binding is shaken. This second edition is uncommon, the first edition is rare. (#151991) (Inventory #: 151991)
$450.00 add to cart or Buy Direct from L.W. Currey
Share this item
L.W. Currey Inc.
Offered by

THE LAST CELT: A BIO-BIBLIOGRAPHY OF ROBERT ERVIN HOWARD

West Kingston, Rhode Island : Donald M. Grant , 1992
(click for more details about GUMMITCH AND FRIENDS ..)
View all from this seller>